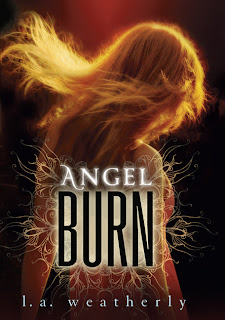 Summary:
Willow knows she’s different from other girls, and not just because she loves tinkering with cars. Willow has a gift. She can look into the future and know people’s dreams and hopes, their sorrows and regrets, just by touching them. She has no idea where this power comes from. But the assassin, Alex, does. Gorgeous, mysterious Alex knows more about Willow that Willow herself. He knows that her powers link to dark and dangerous forces, and that he’s one of the few humans left who can fight them. When Alex finds himself falling in love with his sworn enemy, he discovers that nothing is as it seems, least of all good and evil. In the first book in an action-packed romantic trilogy, L. A. Weatherly sends listeners on a thrill ride of a road trip – and depicts the human race at the brink of a future as catastrophic as it is deceptively beautiful.

Review: I started this book online only got four chapters in. I loved it then and I still love it now. This is a non forgettable book. Its amazing and pays great attention to detail. I love how the two story's start out different then intertwine. Now normally I never understand why an author would write in two different point of views but this is just... Wow I loved it it made the chemistry between Alex and Willow more memorizing. When they met its crazy intense that you just cant put the book down even if you need to sleep. The chemistry between Willow and Alex is stunning from the beginning. It is such a strong pull and the fight it I dont know how they did it. But eventually it will be to much to fight anymore. There is so much I want to say about this book but cant because i don't want to post stuff you shouldn't know. Lol. But just saying best book EVER! Ok one of the best books. I started looking for L.A weatherly on Facebook and such as soon as I was just about done with the book. I found out that Angel Burn was originally Published as Angel in the UK. But back to the story. This is one of the most romantic most touching books I have EVER read. I can not wait for Angel Fire in October this year! I completely recomend this book. This is a must read all the way!