One lucky winner to receive an eBook copy of Landfall by Joseph Jablonski! 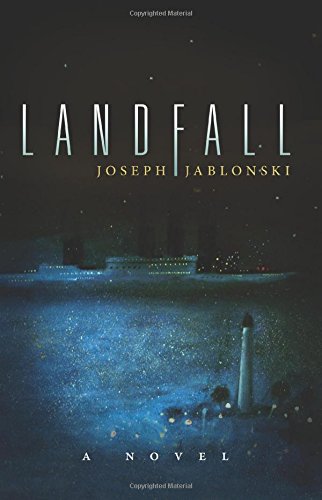 About the Book: (Amazon)

Forty years ago, a young woman was murdered aboard an American freighter. Now, her children are grown and they want answers. Jake Thomas is the only one who can tell them what really happened.
But after a lifetime at sea, Jake has finally settled into a new marriage and a comfortable retirement. He’s afraid that digging up the secrets he’s kept buried will undo everything and lead him to a truth he doesn’t want to face.
In this riveting story-within-a-story, Jake’s peaceful routine in Portland, Oregon, stands in stark contrast to his early days as a merchant seaman in Subic Bay, when he set off on a journey to discover his dark side. A journey that hasn’t yet ended.
Like Joseph Conrad, Joseph Jablonski has created a story set at sea that is as much a careful observation of human nature and a powerful condemnation of war as it is a fascinating sea story.

About the Author: (Amazon)
Joe Jablonski passed away suddenly in May 2014 from natural causes. He left behind several unpublished manuscripts including LandFall. His wife, Darlyn Jablonski, and son, Peter Jablonski, are very excited to have published LandFall posthumously as one of Joe's great aspirations was to get more manuscripts published (prior to LandFall, Three Star Fix was published in 2008 and Pirate Nights, a NY Times Op-Ed piece, was published in 2013).
Joe grew up in Nebraska, graduated from the US Merchant Marine Academy in 1970, then pursued a career in the merchant marines. He rose to the top of the ranks and retired after sailing several years as Captain of APL's MV President Kennedy containership in 1998. Joe was a lover of life. He loved dinner parties, travel, tennis, scrabble and adventure. He passed away suddenly and is greatly missed.We are very grateful to Michele Orwin of Bacon Press Books and we hope that you enjoy LandFall.Peter Jablonski and Darlyn Jablonski

What to Win:E-book Copy (mobi or epub) of Landfall

How to Enter:Leave a comment WITH YOUR EMAIL (so we can contact you if you win) and what type (mobi or epub) you prefer

Get paid for your notes on SwitchNote!
If you're a college kid like me, you know the struggle is real when it comes to money. Well, SwitchNote is a great solution! Just for uploading notes you should already be taking anyways, you get points. Points are then eligible for giftcards, discounts, and giveaways. Points are super easy to earn and get you things, fast!
For example, an Amazon eGiftCard is only 50 points! So is a Starbucks $5 code. Bigger things cost more, like a $100 Visa Giftcard is 4000 points, but a $100 Restaurant.com giftcard is only 2000 points.
Like I said, getting points is super easy! Each document you upload is worth 10 points. Refer friends and get 50 points per friend. And when people download your notes? Another 10 points, per download! Sweet!
Not only will you be doing well in the points department, you'll be doing well in school too by taking good notes so others will want to download them. It's like two birds with one stone - except you're supposed to be taking notes anyways so is there really even a stone? I dunno but anyways, you should totally join SwitchNote! It's free, easy, and fun when the points start pouring in!
Posted by Tasha Nicole at 2/17/2015 09:07:00 PM No comments: Jassy de Jong, author of Drowning, has provided a guest post for readers. You can read it below:


I confess... I love Valentine’s Day.

Some call it over-commercialized. I say that’s just as well. Thank goodness for all those entrepreneurs out there, designing cards with hearts and glitter, and making teddy bears on sticks and ruby pendants and chocolates with red wrappers, and growing long stemmed roses. I mean, what would we give as gifts otherwise? Easter eggs? Pumpkins?

Some call it schmaltzy. Well, what do you expect? It’s a day celebrating love. Soppy, doting, romantic, couply love. It’s all about hand holding, intertwined fingers, long, deep gazes into each other’s eyes. It’s about saying, “You’re so amazing,” and getting the answer, “No, you’re so amazing, and then saying, “I’m so glad I met you,” and hearing, “No, I’m so glad I met you. Here, have some more champagne.”

I googled the origins of Valentine’s Day... I had a confused idea it was something to do with a saint rescuing a lot of animals, which sounded loving and very appropriate for a day filled with so much caring. But I found out I was wrong. The animal rescuer was St. Francis of Assisi and his celebration day is on October 4.

Valentine’s Day doesn’t quite have the romantic roots I hoped it would. The ancient Romans celebrated the feast of Lupercalia from February 13-15. During this time they sacrificed a goat and a dog, and then, while drunk and naked, whipped the women with the hides of the slaughtered animals. Say what? I’m struggling to see the romance in that. Apparently the women believed that a good beating made them more fertile, so they eagerly lined up for their punishment.

There was a matchmaking lottery as part of the festivities, where names were drawn out of a hat. If the match was right, the couple would get together for the duration of the festival.

Of course, it wouldn’t be ancient Rome if there weren’t some executions involved. History tells us that Emperor Claudius II executed two men, both called Valentine, on February 14th, during different years of his reign. Why on the same day? Who knows? But as a result, the Catholic Church began commemorating this day to honor their martyrdom.

It seems a big leap from whippings and slaughterings, to restaurants with elegantly designed menus featuring oysters, with tables set up for two. But seriously, aren’t we lucky in today’s modern times to be able to unwrap a carefully chosen gift while waiting for our heart shaped chocolate mousse to be served, instead of watching somebody flaying a dead goat before they start flogging us with the skin?

Valentine’s Day. It’s all about gratitude.