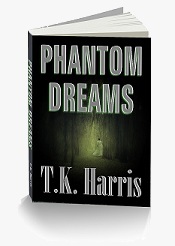 Phantom Dreams by T. K. Harris begins in the mind of a serial killer, then the FBI agent tracking him, and finally the woman who dreams about the killings.

Kathy Gilliam is a twenty-nine-year-old single, work-a-holic, with an ailing father. She lives alone and up until recently has nightmares she can't remember. However as the stress over her father's declining health and an important account looming at work begin to exhaust her, her nightmares become more frequent and more vivid.

At the urging of her primary physician Kathy seeks the help of a psychiatrist who advises her to keep a notebook beside her bed to write down the dreams. Several sketches later, Kathy realizes that the faces from her dreams match those of murder victims of the Coast-to-Coast killer that are splashed across the news. Feeling that she is losing her mind, she tries to ignore it. But Kathy eventually finds herself at the local police station telling her story. However, instead of being of help Kathy may find herself a suspect, or the next victim.

The novel has suspense and mystery to it, which many will enjoy. The description is full of many sights and scents. It takes place mostly in the spring in the Southeast (Georgia, Tennessee and Alabama) which I am familiar with so it feels realistic in that way for me.

Kathy and Agent Matthews' characters are just ok for me. However, the serial killer's mind is entertaining in that he is completely insane. His conversations with the "other" person in his head are shocking. What I found interesting is that the reader doesn't know which of the two is the "real" person and which is just the voice in the head until the end.

When I first started reading this, I thought it was a straight crime thriller. The beginning is quickly paced and brief. However, once we're introduced to Kathy the pace begins to slow. We learn about her day-to-day life, her past and worries and dreams. This goes on for several chapters and then we're thrust back into the serial killer's mind for a chapter. The next several chapters return to Kathy hanging out with her friend Margo or talking in detail about Kathy's job. A few chapters about Agent Matthews finding a body and his frustrations with the case follow this; and then we're back with Kathy for several more chapters.

The combination of the two stories (Kathy's normal world and the hectic and dark world of the serial killer and the agent tracking him) didn't work well for me. I felt like I was reading two different stories even when Kathy becomes involved with the investigation. It wasn't until almost 30% through that I realized that it was supposed to be Kathy's story.  However, I just couldn't shake the initial impression of crime thriller, so much so that the chapter after chapter of Kathy's everyday life felt out of place. I felt that it was sidetracking the real story of the serial killer. It would have worked better for me if Kathy had been introduced sooner.

As a writer, I would've like better transitions and a smoother fusing between the worlds. As a reader, it is overall an ok read. This is a mesh of a thriller, chick literature, and paranormal romance. There is suspense and mystery that's maybe stretched a tad too long by contrived situations, some predictability and stereotypes. Some of what Agent Matthews does didn't seem protocol but I'm only basing this on my years of watching Law and Order and not formal education about law enforcement. But it has a satisfying and dramatic ending. Although I would've liked a little more than I got regarding the reason for Kathy's dreams.

You can find out more at: http://www.tkharrisonline.com