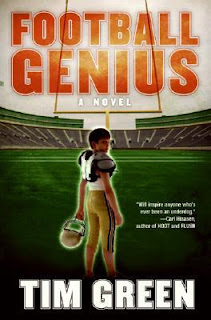 Football Genius by Tim Green follows Troy White as he realizes a dream. Troy lives with his mom, has two good friends and loves football. But he hardly ever gets to play because he's second string quarterback and the first string quarterback's father is the coach. So Troy sits on the sidelines. But he has a gift of being able to predict what the other teams' next play will be. There's a turn of events when Troy's mom gets a job with the Atlanta Falcons football team. Will Troy get a chance to help them turn around their losing season?

I enjoyed this book. It was my first sports related read in a long time. I did found it a bit hard to follow some of the technical football terms, but it was a good read anyway. It gives you what you need to know to get an idea about what's happening during the game scenes.

I'm familiar with Atlanta and the Falcons, so it made for an entertaining read to hear about places I knew. While using a real football team made it realistic, it also dates the book. I admit that I only recognized a handful of players names, many of which are now retired from the NFL.

Troy's character is realistic and easy to relate to. Like any other 12-year-old kid he has dreams, good friends and minor problems at school with bullies. He sometimes makes poor decisions but he owns up to them. I thought this was a good lesson because although he gets in trouble, it's not as bad as if he chose to lie. Truth is an important theme throughout.

The suspense the author creates is great. I kept waiting for things to happen whether good or bad. It kept the momentum going and me reading, waiting for the next obstacle to be overcome.

I recommend this for middle grade readers whether you like football or not, whether you're male or female.