Love ties them together. Death can't tear them apart.
Best. Birthday. Ever. At least, it was supposed to be. With Logan's band playing a critical gig and Aura's plans for an intimate after-party, Aura knows it will be the most memorable night of her boyfriend's life. She never thought it would be his last.
Logan's sudden death leaves Aura devastated. He's gone.
Well, sort of.
Like everyone born after the Shift, Aura can see and hear ghosts. This mysterious ability has always been annoying, and Aura had wanted nothing more than to figure out why the Shift happened so she can undo it. But not with Logan's violet-hued spirit still hanging around. Because dead Logan is almost as real as ever. Almost.
It doesn't help that Aura's new friend Zachary is so understanding—and so very alive. His support means more to Aura than she cares to admit.
As Aura's relationships with the dead and the living grow ever complicated, so do her feelings for Logan and Zachary. Each holds a piece of Aura's heart...and clues to the secret of the Shift.
My thoughts:
I generally do not like ghost stories.  They all tend to be similar, and characters that linger in the past can make the book a little boring for me.  But Shade was definitely not like any ghost story I've ever read before.  I was even a bit lost in the beginning, wondering, what kind of book is this supposed to be?  Once I actually started getting into the story, I could see that it was completely original and I was in love.  And this book had a real "I have no idea who she is going to end up with" love triangle, which is rare for me to find.  The ending had me spazzing out, and I am extremely excited for the next book! :D

Goodreads Summary:
Frannie Cavanaugh is a good Catholic girl with a bit of a wicked streak. She's spent years keeping everyone at a distance—even her closest friends—and it seems her senior year will be more of the same...until Luc Cain enrolls in her class. No one knows where he came from, but Frannie can't seem to stay away from him. What she doesn't know is that Luc works in Acquisitions—for Hell—and she possesses a unique skill set that has the King of Hell tingling with anticipation. All Luc has to do is get her to sin, and he’s as tempting as they come. Frannie doesn’t stand a chance.

Unfortunately for Luc, Heaven has other plans, and the angel, Gabe, is going to do whatever it takes to make sure that Luc doesn’t get what he came for. And it isn't long before they find themselves fighting for more than just her soul.

But if Luc fails, there will be Hell to pay…for all of them

My thoughts:
I've been dying to read this one forever, and finally just decided to buy it since I couldn't find it at the library.  Although from reading the summary, it sounds cheesy and cliche, it really is not.  Luc was not the demon I thought he'd be, Gabe was not the angel I thought he'd be, and Frannie was not the Catholic girl I thought she'd be.  (Wow, that was a slightly repetitive sentence lol).  Towards the end, Luc got... dare I say it, nice?  And Gabe was starting to look less of a goody-two shoes.  So I am conflicted Team wise.  A great new creative twist on a classic concept. 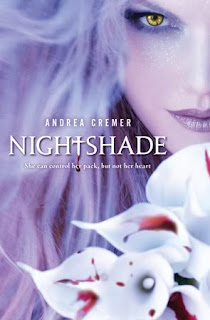 Goodreads Summary:
Calla Tor has always known her destiny: After graduating from the Mountain School, she'll be the mate of sexy alpha wolf Ren Laroche and fight with him, side by side, ruling their pack and guarding sacred sites for the Keepers. But when she violates her masters' laws by saving a beautiful human boy out for a hike, Calla begins to question her fate, her existence, and the very essence of the world she has known. By following her heart, she might lose everything— including her own life. Is forbidden love worth the ultimate sacrifice?


My thoughts:
So, I read this in one sitting.  May possibly be my favorite werewolf book I've ever read.  I LOVED Calla, and all the characters in general.  They were all full of life, and had so much personality.  And Ren... oh Ren.  I loved both Ren and Shay, but I think Ren won out for me in the end :) What I was pleasantly surprised about was all the little bits of philosophy, censorship, oppression, and all that lovely stuff we talk about in English class.  I guess you could say it has more depth than your stereotypical YA novel.  Ends in a cliffhanger, so I am eagerly anticipating for Wolfsbane (the next book).