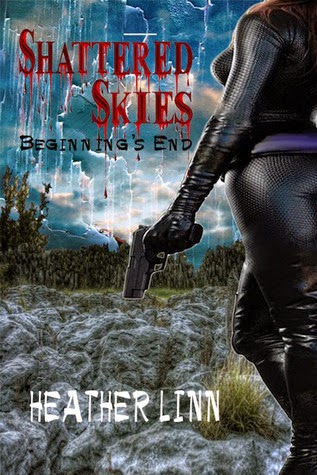 Beginning's End Book One of the Shattered Skies series by Heather Linn begins with an alien invasion. But it's not the kind we think of: little men with big heads. No, it's something far worse, and humans ignored the warnings.

The aliens of Catalina's world are vampires who have come to enslave, feed upon and breed with the human race. The product of vampires and humans are Dominus, who are virtually invincible because of the vampires' careful planning. But will their over-planning be their downfall?

The first chapter caught my attention right away. Who is Catalina? What is her weapon against these creatures that are twice as fast, twice as strong and can survive in the daylight? And how did she just kill one?

The author's world of the Shattered Skies series has pretty cool concept of vampires and what would happen if they invaded Earth. The main character Catalina is brash and tough. She is not satisfied with her lot in life and is out to fight for her freedom. But one night everything goes horribly wrong when she finds herself face-to-face with the king Dominus.

As far-fetched as the events in the book are, I kept reading. Catalina was an OK character. She was consistent. She was tough. She also was bit annoying, but not enough for me to stop reading. The other characters were one-dimensional. Some of them were stupid. I should say naïve. OK. Some were naïve and some were down right stupid. But they did their job in supporting whatever Catalina took it upon herself to do.

The plot is sketchy. I kept waiting for something to be revealed and it never was. Nothing was really resolved and Catalina makes a mess of things. However, the background and the history were good. I think that’s why I kept reading, just waiting for that big reveal that never came. I was not satisfied with the ending.

The setting is basic. It plays a role in the “plot” but is not overly important.

This book has a lot of sexual content in it, so I’ll have to rate this for adults only even though the characters are barely out of their teens. It bordered on erotica in places so be aware.

Although it began with intrigue, the breadcrumbs left by Beginning’s End were not enough for me to follow into the next book of the series.