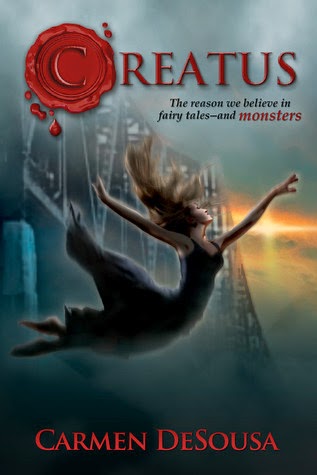 Creatus by Carmen DeSousa is the first book in the Creatus series. Have you ever wondered where all the stories and legends of super humans came from?

The Creatus are a race of people with abilities and strengths that exceed human capability. For the most part, they do what they can to help humanity while keeping to the shadows. But sometimes there is a rogue. Kristina finds out all too well about these beings when she falls in love with one Creatus named Derrick and becomes the target of murder of another mysterious rogue Creatus. Caught in the middle of these super beings, will she survive?

Creatus is a wonderful premise for the origins of the stories of such characters as Superman and Wonder Woman. The character backgrounds are well developed and consistent throughout. The setting is in Boston, both the upper crust and the not so. It has a wonderful first chapter that draws the reader in immediately. It's exciting, heartbreaking and mysterious. The story kind of slows for several chapters.

Once the plot dilemma reveals itself, it is simplistic. The reader is able to narrow down the mystery rogue's identity pretty easily once all the players have been introduced. It seems the majority of the story is dedicated to developing Kris and Derrick’s relationship, leaving the mysterious rogue attacks on humans as secondary for a while. I honestly skimmed through several chapters.

The dialog is kind of stilted in places and I had a hard time immersing myself in the story. I did like the introduction of Vic's dilemma and how it leads into the next book on the series.

The ending is fast-paced and gets the readers wondering about book two. I loved the cover.

It is definitely worth a read, but be advised that it is more romance than action.