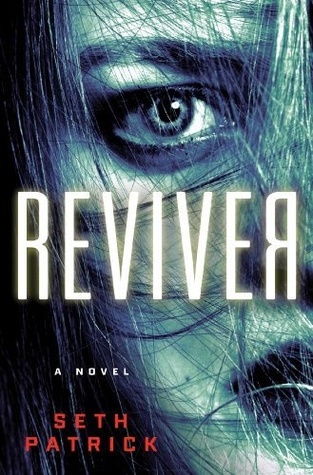 I don't usually read horror, but my cousin was in town and she loves the genre. So we downloaded the audio book from the library (love my library!) and played it on the road on our way to Thanksgiving dinner. I was hooked.

Reviver by Seth Patrick begins with Jonah Miller performing a revival. This is not the kind of revival we usually think of. In Jonah's world, there are people who can revive the dead for only a few moments. There are two main reasons to do this: 1) the dead are revived to say good-bye to loved ones, and 2) the dead are revived to name their killer. Jonah's job is to ask the murdered dead about their deaths and try to get information on their killer. Everything is routine until Jonah's most recent revival. When the dead woman Jonah revives speaks to him in a voice he knows is not her own, he realizes there is something in the darkness beyond death and it's watching him.

After a famous writer is murdered, Jonah becomes involved deeper than he intended in the case. He is just an information gatherer, but the murdered writer wants Jonah to investigate and he won't get out of Jonah's head until he does.

I enjoyed the mystery of this book. The reader learns and discovers clues with Jonah which is engaging. The speaker did a good job with conveying the intensity of the prose. He also made it entertaining by performing accents for the different characters. I liked the secondary character Never who is Jonah's sounding board and the person who keeps Jonah "sane."

This alternate world where the dead can speak again one last time is explained well. At the open of the story, the "science" of revival is still quite new. The author does well showing the pros and cons and the evolution of revival.

The book tipped a bit too far into the supernatural toward the end where the final scenes were overly orchestrated. I liked the mystery of the book, but the mysticism and the still relative newness of the concept of revival within the plot was a little heavy. I didn't know that it was a trilogy when I started listening. So I suppose all things will be revealed by the end.