I've Never Been to the Ukraine: Book Review The Septavalent Stone 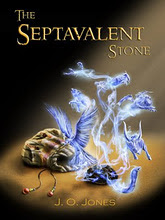 The Septavalent Stone
by J.O. Jones
I was not ready for this book. I had read an excerpt of the story on J.O. Jones’ blog (http://theseven-piecestone.blogspot.com/). It was the first chapter. It was interesting and funny and it hooked me. I bought it on Amazon Kindle and downloaded it for 99 cents. It took me about a month and a half before I got a chance to finally read it. And then it took me another two or so weeks to read it.
The first chapter is not what the book is about. I had gotten to know and like those characters and then most of them disappeared. So we’re left with Uncle Jeffrey who is only a gateway character to our hero? Andrew, Uncle Jeffrey’s estranged sister’s son (nephew).
So this book is about Andrew who goes to a magical medical school for people with “unique” ailments (like being a ghost that starts living. Apparently to ghosts living is the worst thing that could happen to them) and how Andrew’s family ends up causing more trouble at a school with secrets that it doesn’t want to be revealed. Andrew is from Nigeria where I have never been and the magical medical school is in the Ukraine where Andrew AND I have never been. It is a really interesting combination.
I’m not totally sure what to make of this book. It is not like other books I have read about magic or fantasy or medicine for that matter. The locales are new to me and I am just in awe of the originality of this story and how it was all laid out. The main character Andrew becomes just like the reader in some ways because he has no idea what is going on and no one will tell him. Everything is revealed layer by layer until by the end you’re like. “Oooohh! I get it. I think.”
So I still haven’t told you what happens in the story. Well, after a lengthy and almost boring stay in chapters 1, 2 and 3, we finally get some action. Andrew has spent the first couple of chapters getting his visa to go to the Ukraine for school. There are some sparse exciting parts, but not enough to have gotten me through it any faster. So he finally gets to the Ukraine and everything is fantastic! There is magic, medicine and lots of mystery. (Loved the fairy wallpaper, by the way.)
It is not until almost nearing the end that we find out that Andrew has the Septavalent Stone and that he could unlock its power. But the stone in the wrong hands…you know the deal. He has a bossy cousin named Aloysia who is also at the school and who is bent on getting the stone. She’s Uncle Jeffrey’s daughter who turns out to be a BIG help and not a bad person after all because she seems to know everything and figures out everything, but still just tells Andrew information in bits and pieces. I guess that little plot device kept me reading because I was like “What is going on?”
Well, this is getting long. So I gave it a 4 out of 5. There are some grammar errors. I was kind of mad that many characters were introduced and then never heard from again without so much as a good-bye. Other characters were completely useless and they still spent a lot of time talking. And then it bugged me that the point of view jumped around a bit from character to character without warning, but it wasn’t that hard to follow. And Andrew was too passive. But the incredible background, locales, entertaining and diverse personalities, completely weird medical practices and ailments as well as the cool mysteries (yes, that’s plural) kept me reading to the end; and I liked how it ended between the cousins.
Get past the first couple of chapters and you’re in for a surprise. This could totally be a series about the school and/or the other characters, not necessarily Andrew. I would definitely read more by this author.
Posted by Cherese Vines at 12/16/2011 01:22:00 PM