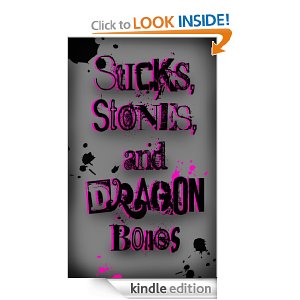 Sticks, Stones and Dragon Bones by Evelyn Ink revolves around the five Darlington sisters and their adventures in Enil. After finding a chest in their attic, Paige and Bean discover a map, books, coins, a sword engraved with their mother's name, an old iron doorknob and a key. The girls work out that the doorknob could belong to one of the many doors in their old house that go to nowhere. However, with the doorknob and the key in place on an old basement door, a portal opens from our world to Enil. Where or what is Enil? The sisters soon get swept into this strange world before they can question their mother.

I liked the story right away. It at first brought to mind Peter Pan. It doesn't have much of the absurdity of Peter Pan, but has all of the adventure. The Darlington sisters are uniquely crafted characters. Paige and Bean are consistent throughout and have an enjoyable bantering sense of humor similar to what I share with my sisters. The twins Hayde and Dorrit are especially cute as 6-year-old would-be cutthroat pirates.

I'm just beginning to get a feel for the setting. As this is a "quest" story, we only get glimpses of the places the Darlingtons travel through. But they are described enough to be interesting. The telling of the background story seemed odd in places because I had a mindset about Enil that didn't include "tabloids." But once I accepted it, I was able to continue. Some parts of the background did seem a bit familiar. I have read too often about heroes not knowing their full "significance-to-the-world"  background and suddenly coming face-to-face with it. But I won't reveal too much. I have just seen that aspect already in other works. I suppose that detail is in the formula for many of the adventure stories out there.

The story details, however, are original in many other ways. The tension and excitement is well done. I've read Ill-fated as well, and Evelyn Ink knows how to write suspense and adventure. I look forward to the next book in the Sticks, Stones and Dragon Bones series. However, I didn't realize it was a series until page 189 of the 199 page book. I was ready for more adventure.

I was a bit concerned about pregnancy aspects in the story. My oldest is 7 so I'm not sure I would be discussing those subjects with her if she asked specific details. Yet, as far as this being for target age 8-11, I think it's appropriate. A little bit to scare, a little to exhilarate and a little to keep you guessing.

I was provided with a copy for an honest review.