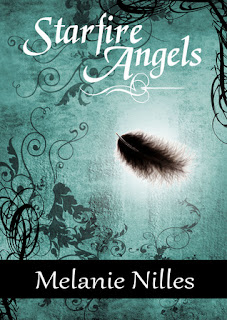 What we think we know of angels may be completely wrong.

Raea wakes up in a cold sweat. She has dreamed of her mother again. Her mother has wings. Is it because she died 13 years ago and Raea's subconscious wants her to believe her mother is in a better place watching over her? For normal teens that would probably be the answer, except Raea wakes from one of these dreams with wings of her own.

Starfire Angel Book # 1 of the Starfire Angels: Dark Angel Chronicles by Melanie Nilles reveals a possible truth about angels, at least for Raea, as she discovers her true origins.

As I began this book, it was hard to really immerse myself. The story is written in third person limited where we are being told about Raea while still being privy to her thoughts and feelings. Here is where I had problems. Her thoughts were not distinguished by italics or even a new paragraph so that I would know that she wasn't speaking aloud. I thought the book should've been written in first person. But as I got farther into the story, I was allowed glimpses into other characters' heads.

The author also did something I personally haven't seen before. She put dialog in brackets to represent when characters were speaking another language. So even though the words I was reading were in English, it was supposed to represent another language. It was different in an interesting way once I figured out what the brackets meant. Although the author's style distracted me, I eventually got used to it.

Turning to the characters: Raea's point-of-no-return moment fell flat for me. She didn't have a defining personality and I wonder if the author wanted readers to be able to insert themselves into the story. The only character that really elicited any response from me was Josh. I wanted to just smack him! He talked way too much. Raea had really negative thoughts about him in the beginning. I thought she was just being mean. But by the end of the book I completely understood.
The Starfire creeped me out. I'm not really sure I understood their purpose.

The bad guy was obvious and a weak character. I kept wondering what his purpose was too because for a long time he wasn't doing anything “villianly." The other characters pretty much stood around waiting for their turn to say their lines. Cardboard cut outs.

The setting was new for me. I've never been to the Dakotas. The snow played a role in certain plot points that made it interesting.

The description was sparse but functional.

The world building is what kept me reading. The ideas behind this story are unique and intriguing. Raea's origin has rich history, language, and destiny. I suppose since this is the introduction to the series, we have to suffer through a boring plot to set up the real action. I'd like to read the next book to see if it really does become more exciting because Raea just couldn't carry this story alone.

I recommend readers give it a try, but don't expect much from our heroine this time around. On to book two.