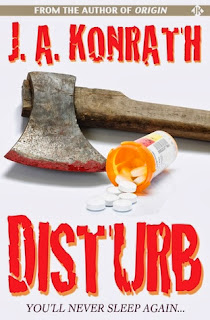 Disturb by J.A. Konrath is a "what-if" thriller about a drug that could eliminate sleep, giving people back years of their lives that is currently wasted sleeping. As the main character Dr. Bill May, an FDA agent, begins research to determine approval for the drug N-SOM it quickly becomes evident that something is wrong. The man who created N-SOM, Dr. Nikos Stefanopolous, is viciously murdered but his daughter is adamant about continuing to get the drug approved. People working on the drug are disappearing and that includes a previous FDA agent. What's going on here?

This was another novel that was somewhat out of my genre preference, but I was entertained. There are many twists and surprises that are just crazy. I read Origins (also by Konrath) and I saw a number of similarities in situations and some wording. It was a different premise, but it had many similar elements, such as the facility where N-SOM is manufactured and tested is underground. In Origins, the facility where the "beast" was kept was underground. This made the some of the story seem a bit recycled and somewhat predictable. But overall, it delivers on gore and deranged characters.

I recommend for horror readers.