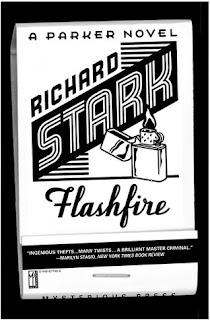 I found this book in the library because I had just seen the movie Parker starring Jason Statham and Jennifer Lopez. Something didn't feel right about the movie and when I saw that it was based on a novel, I decided to find out just what felt wrong about Parker. I enjoy Jason Statham movies, but Parker was just "off." Anyway, after reading the book, I see what the script writer was attempting to do. It didn't work.

Flashfire by Richard Stark is about Parker. He is a criminal--a very creative one, but still a criminal. He works off an "honor" code. Honor among thieves, right. Parker is offered a piece of a much bigger heist after participating in a bank robbery, but he declines. So when he is given only a small portion of his take on the bank job, he's upset.  The other thieves promise to give him the rest once they finish a big job that they needed his share to accomplish. So starts the vendetta that takes us in a round about way that gets Parker in a lot of trouble. In the movie, they attempt to murder Parker, but in the book other characters along the way try to get him.

I didn't much care for the book, but at least it seemed to have a plausible plot--more than I can say for the movie.

If you're into heist books, check it out. Apparently Parker is a series and this was just one of his many adventures in crime.

More reviews at www.cheresevinescharmingwords.wordpress.com
Posted by Cherese Vines at 2/07/2014 06:00:00 AM