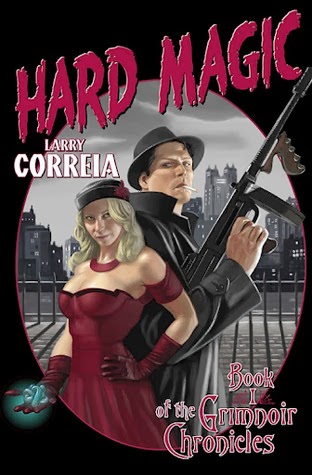 Hard Magic (Book 1 of the Grimnoir Chronicles) by Larry Correia
Imagine a world where having "magic" is commonplace but still feared. Imagine a world changed and molded by the introduction of this phenomena, where any child could be born with the powers to change gravity or be able to create fire from their fingertips.
This is the world Jake Sullivan, a private eye, grew up in and it's ever changing. He's a magic user called a Heavy; he can change gravity. When Sullivan goes to prison for accidentally turning a man to mush while defending a boy with magic abilities, he gets a second chance. All he has to do is help capture other criminal magic users. His last job to square with the law happens to be capturing his ex-girlfriend. Before he can take her down, a group of well-trained magic users come to her aid and whisk her away. Things start to get fishy from there, and Sullivan just can't let a mystery go.
I liked this book. I like history and this book is set in the 1920-1940 era. But the twist is that because magic is in the world, familiar events and famous people take on new meanings. Perhaps things happened the way they did because of magic.
The characters were believeable and consistent. The setting was appropriate. It made it easier for there to be more intrigue and good old fashioned hard investigation. No Google.
It has a great plot. Each section was like a mini adventure with rising action and climax, but each one led to the big finale. There were minor questions but I believe it's a series, so maybe I'll find out later.
I recommend this for those who like magic, history, gumshoe, and superheroes. By the way, it's a thick book. Be prepared for the long haul, but remember it uses minor adventures that bring pieces to solve the mystery and prepare the hero for the big battle.
Rating 5/5
Posted by Cherese Vines at 3/14/2014 06:00:00 AM