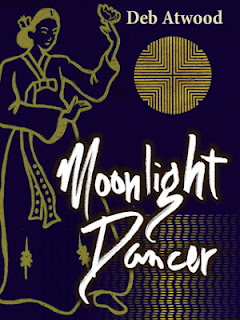 Moonlight Dancer by Deb Atwood is a paranormal novel with romantic elements about Kendra JinJu MacGregor a 23-year-old half-Korean (on her father’s side) college student. Following her father’s death a few years before the opening of the book, Kendra learned two things: men always leave and there is no such thing as ghosts. She is challenged on both these views on the first page when Kendra meets an antique Korean doll and a man named Hiro Peretti (half-Japanese on his mother’s side). Both send her life reeling.

Kendra is drawn to the antique Korean doll and impulsively purchases it from the young handsome, antiques business owner, Hiro. From there, all their lives are intertwined. The doll somehow creates a bridge from 16th century Korea to present day California. NanJu, the spirit of a lower class 16th century young Korean woman, crosses the gap to reach Kendra. NanJu has an agenda and soon Kendra has to choice in the matter.

Reading Moonlight Dancer is like when you see something in your peripheral vision and you turn to look and don’t see anything out of the ordinary. The book also felt claustrophobic. Although there were several different locations, they all led back to Kendra’s bedroom. It was like the hub from which everything in the book happened. It was the sanctuary she retreated to at every major junction in the plot.

Kendra is a solitary figure. She trusts no one and is fiercely independent to her detriment. Her decisions are made from a position of distrust. By the time she figures out that she does have support and love, it is almost too late.

I got a sense of Kendra’s relationships with her father, her mother, her friend Anna; but they’re all vague. Her father is dead. Her mother, adopted younger sister and grandfather have gone abroad for a year to Shanghai, leaving Kendra in the family home alone. Anna, who could have been her confidant, is incapacitated early on. Kendra is alone except for her dog Akira. So when the ghost of NanJu enters Kendra’s life the only thing standing between them is a stranger and a man at that, Hiro.

Hiro has his own obstacles to overcome in his pursuit of Kendra, not including NanJu’s presence. Because of Hiro’s Japanese heritage and NanJu’s horrific experiences during a Japanese invasion of her Korean village, she frequently stands between Kendra and Hiro’s developing relationship.

Moonlight Dancer has great imagery and I was able to get a good sense of NanJu’s village, her struggles and her loves and losses. The book follows Kendra for the majority of the story, but it gradually merges with NanJu’s story. There is a major portion where the reader is completely submerged in NanJu’s tale. It was interesting, entertaining and could really have been its own book. This leads me to the fact that the book was a bit long for me. There were periods of the plot slowing down and then something exciting happens to kick it back up for a little while, then slow and then exciting again. There is always a hint of the something big that is supposed to happen, but it takes a while to get there.

I enjoyed the book and would recommend to readers who like a bit a of romance with their ghost story.