This post was brought to you by Scott Hurst 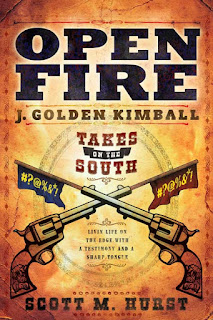 J. Golden Kimball is as happy as a pig in spring mud until he receives an unexpected mission call to the South. In this fast-paced story filled with holy high jinks and missionary mayhem, Golden squares off with his characteristic cowboy sense of humor against everything from spiteful preachers to the threat of death at the hands of the Ku Klux Klan. Join Golden a he takes on the South with these unbelievable but true stories.

Scott graduated from Brigham Young University and is currently enrolled in the School of Hard Knocks. He is a nomad who claims his home in Utah, California, Hawaii and wherever else in the world he happens to be. The closest thing he’s ever done to being a cowboy was dude ranching for a day. He couldn’t sit down for two weeks afterwards. Like Golden, he’s tall and skinny. He also shares some of Golden’s colorful vocabulary and his immense love for the gospel.


Here are a few reviews:

5.0 out of 5 stars LDS or not, this is a great story!
By Tinna
This is a well-written partial biography of a great CHARACTER in LDS history. I should think anyone would enjoy this glimpse into the life of an early missionary in the post civil war south. At that time the KKK, some suspicious clergy, and others, made these faithful men one of their main targets. This book is interesting, filled with humor, tragedy and inspiration too. What more could we ask?