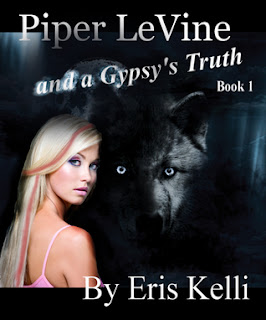 Piper LeVine and a Gypsy's Truth by Eris Kelli is the first book in the Piper Levine series. Seventeen-year-old Piper is the Senator's daughter and the focus of much negative media attention that strains her relationship with her parents. But as we find out in the first chapter, the strain may be deeper than teenage angst. The Senator's wife is not Piper's mother, and Piper never knew.

After many revelations and tears are shed, Piper goes to the only place she feels loved and safe, her Grandma Sidney's house, an animal sanctuary. But it may not be so safe when a strange man and then a werewolf show up outside her bedroom window.

I didn't know what to make of this book. The first several chapters I was asking myself, Where is this book going? Several times I just wanted to stop reading. Piper's first person account of events is sometimes disjointed. Sometimes I didn't know where she was and what she was doing, nor did I care. Even with the werewolf present it just seemed too mysterious.

Piper was not getting any answers and was getting frustrated. So was I. The only reason other more knowledgeable characters weren't cluing her in was because they didn't think she was ready. That was not a good enough reason for me, especially in light of how strong a character Piper has. I think a lot of foolishness could have been avoided if certain information was revealed. I don't think it would have taken away from the mysteriousness of the plot at all.

Piper is not a very likable girl. No one seems to like her except her grandma and a bunch of hormonal young men. I got really tired of hearing all the time how beautiful and amazing Piper is. However, it is not until much, much later in the book that the reader finds out that this attention is related to a plot device.

Still, Piper is rude and stubborn and funny. I got really exasperated with her behavior. She just seems to dig herself deeper and deeper into holes that could have been avoided. But the holes move the plot along and she stays true to herself. That's one thing I like about her character, she doesn't get all gushy and lose her sense of self over the several love interests put on platters before her.

The love interests are weird for a lack of a better word. I didn't know what to make of them. Who is telling the truth and who isn't? Truth is relative in this book. Who knows what the real truth is after reading this installment. I started rooting for one love interest over the other. But I'm not sure if it was the right one. Then their personalities took on new characteristics and I was like, What? It seemed like everyone has a secret to hide from Piper. If she hadn't been as strong as she was, she would not have made it too the end of the book.

The settings were mostly her bedroom on the sanctuary and her bedroom in the gypsy house. Everything that happened always lead her back these two places and the characters came to her. Other locations came and went quickly.

Much of the action was quick but grabbed my attention enough to keep me reading. The climax was a mixture of surprise, disbelief and predictable. I'm not sure where this story is going now, but I'm interested in seeing what's next for Piper.

I'm hovering between a 3 and 4 out of 5. I just don't know what to think of it. I haven't read about gypsies before and that was fresh. The feisty and stubborn heroine gives it enough boost to keep me interested. I recommend readers 16 and over give it a try. There is a lot of "lusty" thoughts throughout that I wouldn't recommend for younger readers.