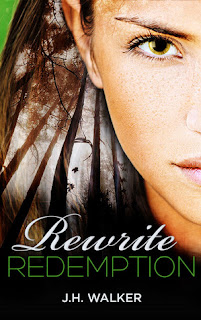 Autumn Jones (AJ) time travels, but she doesn't know how or why or when it will happen. She has lost her mother physically and her father emotionally because of it. The only reason she has made it to age sixteen still sane is because of her best friends Alexandra (Lex) and Ivan (Ipod) who have both taken up residence with AJ in the elaborately built treehouse in her backyard. Then Constantine moves to town and he may have the answers she needs. He might even be a time traveller like her.

Rewrite Redemption has an intriguing premise of time travel and romance. The world building is thoughtful and interesting. The setting of Boulder, CO is intertwined and expressed well in the story. The author creatively uses 1) our interconnectedness with nature and 2) technological possibilities acknowledging and using that connection. The dialog is believable for teens although some phrases were questionable for characters of their age such as "stone cold fox." The story is in first person and works well. However, it irritated me a little when they used text speak like ROFL while speaking. But I guess there are people that go around using those phrases in regular speech and not just for texting and writing.

The foreshadowing is a bit obvious in places but still worth the journey because of last minute decisions that change the outcome. There is a lot left unsaid and not elaborated upon early on especially regarding AJ and Constantine's families. My first instinct upon facing problems I can't solve is to seek my family's help. Here, the plot conveniently cuts off any help for any of the teens by creating the most depressing backstories I have ever read. AJ thinks, and some teens feel, like there's no hope and that they're not supposed to be happy. That was a sad but true statement for many people, not just teens. But the characters don't really relay these scars. Even AJ, who thinks her mother's death is her fault is incredibly well adjusted. Her ultimate goal is just not to become a lab rat because of her "strangeness." Her thinking doesn't seem to go beyond that. Some of the story seemed far fetched but I put myself in suspension of belief mode and was able to really enjoy the story.

AJ and Constantine are the main characters and the chapters alternate between their accounts of events. Thankfully we only get a brief recap in the alternate chapter. I thought the author used the appropriate character to explain the extended version of events. AJ has a likeable voice and although she could beat up on herself sometimes, she is not depressing about it. She is more matter of fact. "That's the way it is. It sucks, but that's just how it is" attitude. She does pat herself on the back when needed and she is far from helpless. AJ cares about her friends and they care for her. I was impressed with the level of loyalty in AJ, Lex and Ipod's friendship. It is not superficial and it is deeper than family ties at times. It was nice to see real friendship. Lex's personality may have been over the top and really fictionalized, but it had some depth. But having that level of maturity and self assurance seemingly without evident flaws was a little unbelievable. Although I totally like her character! She is a "kick butt and take names" kind of girl. Ipod is a one-dimensional plot device as is AJ's father even though they are important to the plot.

Constantine is a really together young man when it comes to his Editor (time traveller) skills even in the mist of his guilt at causing his family's decline into despair. He knows how to use his resources and restore himself to balance. However, he's naive and kind of runs hot and cold to both extremes about love and relationships with AJ and his family. But he works as a pretty good love interest and hero, being both entertaining and alternately intense when needed.

Things that bothered me:

1) The total lack of parental involvement on any level. Parents are either evil or completely weak. I understand that as a YA book, the young character needs to be the hero and do the rescuing, but their independence goes on for a little too long. Fortunately, the ending finally does introduce positive parental involvement.

2) Another thing is that the book is long and takes a long time to get to other information that would be nice to have early on. Like where does AJ go when she's sucked out of the present? That is my first question. I was halfway through the book before I discovered what usually happens when she jumps through time.

3) Another thing is that as amazing as their Editor skills and abilities are, Constantine walked around for the better part of the book sounding like a functioning addict which is unsettling. There is also a strong sexual undertone pertaining to AJ and Constantine's "melding" connection which made me a little uncomfortable. I'm not saying that there aren't YA books with sex in them out there, it was just questionable if their feelings are really of love or just lust. It kind of takes away from the romance.

1) I enjoyed AJ's extend time travel and the mini adventure there. It is a pleasantly unexpected turn in the story. I was waiting for something like it because it is after all a time traveling story.

3) I liked the descriptions of Colorado and the different settings. It really gives each place a distinctive vibe.

4) The storyline is pretty cool and veers away from typical paranormal romances.
Finally, I did get a bit frustrated and confused there at the end with 1) some things being solved without the heroine. I look forward to seeing the hero solve their own problem; and 2) not knowing exactly what happened on the timeline. But like another reviewer said, I did get the gist of it.
Overall a good read, entertaining, great use of setting and world building. This book is exploring some good ideas with time travel. Great cover.