The Statue of Ku 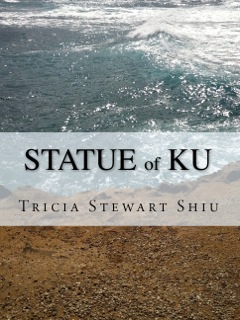 The Statue of Ku is the second book in the Moa series by Tricia Stewart Shiu.
Moa, in her new human body, and her new friends, are all in for another adventure, this time, in Egypt! They are trying to located the Statue of Ku, an heirloom that is rightfully Moa's. Moa and Hillary jump into a limo and are taken to a private jet to the royal palace of the King of Egypt, but when Moa doesn't have any identification, they are taken to a holding cell. Thankfully, the Prince needs their help to find the statue, so they are taken to the palace. There, they meet Molly and Heidi, and having no money of their own and being allowed room and food at the palace, they reluctantly decide to stay and help the prince locate Moa's statue.
But while they are at a traditional Egyptian market, looking for the statue, Moa gets lost. Molly, Heidi, and Hillary go out to look for her, but end up trapped in a crate with a baby when Hillary falls and a baby thief claims she can help.
Meanwhile, Ku is telling us his story, at the same time. Ku's family had a healing power that skips some generations, so when Ku is discovered to have this power, he is worshiped and does not have to do chores, since people will come up to his family to  be healed and will provide the family with food and supplies. But day while meditating, he is drawn to someone calling out for help. When he goes in to help, a monster steals his healing powers. Later that night, his family is taken and killed, all except for him and his brother. He finds his brother the next day. His brother dies in his arms.
Ku then goes to search for people, since his whole village has been killed, and stumbles upon a man who makes him his slave. Am, a girl slave, and a pet monkey whom he nursed to health, are his only friends. When the slave owner, Fet, has the monkey killed, Ku feels like another family member has died. Am and Ku plan to escape, but Am dies trying to reach Ku. Ku then walks the desert alone until he comes across an oasis, where very kind people help him. They later make him leave.
This book also has rituals in it, as did the last one. But I kind of skipped over them this time, feeling that the stories were more important.
This series had a WONDERFUL transition from the 1st book in the series to the 2nd book in the series. Bravo to Tricia! You did not have to read the first book in the series to know what was going on in this book, and if you didn't read it you wouldn't have any problems in this book. She told you everything that happened in Moa, in a tasteful way, and got you into what was going to happen in The Statue of Ku. It really is a lot harder than it seems to find a series where you can just read the 2nd, or 3rd, or whatever book without having to read the first one. So good job, Tricia!
Also, I really liked how we got to know Ku, the person the statue is of, so that we got to understand a bit more about this search, and Moa (since she is a descendant of Ku), and some more history. It was also an interesting way to get you to keep reading. It would stop one part (either the Ku part or the Moa part) at a suspenseful part so you would keep reading until you got to the next part, but by then, you would have past a suspenseful part in the other part, so you'd just keep reading, and reading, and reading until the book was done! That's how I got from 15% to 64% in a matter of a couple hours. It really is a brilliant tactic to use.
I would definitely recommend this book, and I look forward to reading more from Tricia!
(To know how Ku's life went, or what happened with Moa, Molly, Hillary, and Heidi, read The Statue of Ku by Tricia Stewart Shiu)

As part of this special promotional extravaganza sponsored by Novel Publicity, the price of the Moa and Statue of Ku eBook editions have both been dropped to just 99 cents this week. What’s more, by purchasing either of these fantastic books at an incredibly low price, you can enter to win many awesome prizes. The prizes include $600 in Amazon gift cards, a Kindle Fire, and 5 autographed copies of each book.
All the info you need to win one of these amazing prizes is RIGHT HERE. Remember, winning is as easy as clicking a button or leaving a blog comment--easy to enter; easy to win!
To win the prizes:
About Moa: Eighteen-year-old, Hillary, anticipates adventure as she embarks for trip to Honolulu, but gets more than she bargained for when Moa, an ancient Hawaiian spirit, pays her an unexpected visit. Get it on Amazon.
About Statue of Ku:  The second book in the Moa Book Series, "The Statue of Ku" follows Hillary and Moa as they jet to Egypt on the Prince’s private plane to reclaim Moa’s family heirloom, the inimitable statue of Ku. Get it on Amazon.
About the author: Tricia Stewart Shiu combines her addiction to the written word with her avid interest in the healing arts and all things metaphysical in her novels Moa and Statue of Ku and looks forward to finding new ways to unite her two loves. Visit Tricia on her website, Twitter, Facebook, or GoodReads.
Posted by Tasha Nicole at 6/28/2012 08:02:00 AM