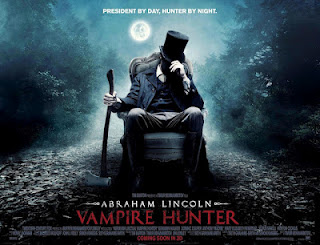 Director: Timur Bekmambetov
Starring: Benjamin Walker, Dominic Cooper, Anthony Mackie, Mary Elizabeth Winstead, Rufus Sewell, Jimmi Simpson
Rated: R
Violence, some nudity, coarse language
I first became aware of this as a book trailer. I thought it was creative. When I saw the MOVIE trailer, I knew I had to go see it. (Tip: NEVER watch the making of a movie before you see the actual movie. That was a big mistake for me. It showed me too much.)
The film stars Benjamin Walker as Abraham Lincoln. We follow Lincoln from when he was a boy, to a young man and finally to president of the United States of America. Of course, in history we hear all about how Lincoln grew up and how he was a self-taught man going from lawyer to politician and president, through the Civil War and Emancipation Proclamation. Some books tell of his marriage to Mary Todd. But what doesn't the history books tell us?
I am a fan of history-made-fun type of books and movies. Things we would never think of and the motives behind what famous people did in history.
I haven't yet read the book, but in the movie it is suggests that Lincoln's mother was killed when he was a boy. When he becomes a man, he goes after that man he thinks did it intending to kill him, only to find out that the other is a vampire. Dominic Cooper's character Henry Sturges saves Lincoln and then trains him how to properly destroy vampires. The rationale behind many of Lincoln's actions and decisions in history and linking them to his exploits as a vampire hunter was seamless as far as I was concerned. The author (Seth Grahame-Smith) of the book and screenplay really thought about ulterior motives for many of the events in Lincoln's life. It makes me want to read Abraham Lincoln's biography.
The only thing that I would've changed was how quickly Lincoln went from clueless to a powerhouse vampire hunter. I felt like some scenes were missing. I also didn't care for some of the Adam's (Rufus Sewell, the vampire leader) decisions. He was either overconfident or dumb. There is a lot of violence due to dismembering and there being several war sequences, although there is nothing too gory. There is brief nudity and sex, and coarse language in the beginning. But the movie was great to watch, with awesome stunts and the re-imagining of the way scenes played out. Abraham Lincoln's weapon of choice was an ax. The stunts with the ax were great. The movie was a good length and a good pace. I really enjoyed it. I would recommend this movie to those who like "hero" movies, vampire movies, and interesting spins on history. I would NOT recommend this movie for younger movie-goers. The R-restricted rating is pretty accurate.
Rating: 4.9/5
Posted by Cherese Vines at 8/23/2012 04:19:00 PM