Book Review: The Altercation of Vira

The Altercation of Vira by Kenechi Udogu is the story of Ama, whom I liked right away. Ama is on her way to a going-away party for her closest friend, Mel and his girlfriend Janet. She hasn't seen Mel in a few years since he moved to the big city and hooked up with Janet. Ama is driving to the city and thinking about her dislike for Janet when she nearly hits something that runs across the road. Her already ancient car gives up the ghost and she starts walking to find help. From there Ama ends up kidnapped (or so she thinks) and taken away from Earth realm to Vira which turns out to be her real home. But before she's whisked away, Ama manages to contact Mel because she thinks she's in danger. In search of Ama, Mel is taken to Vira also seemingly to help save a race who has been persecuted for generations. However, Ama and Mel find themselves on opposite sides in a brewing war.
The world building in this book is imaginative and believable. Vira is a dark realm, remaining in "night" for most of the book. I had a hard time remembering this, but the author does remind the reader sufficiently. The characters do not seem to change as much as I would've liked. Mel is not tested and is really just a plot device, although he is a fleshed out plot device. Ama changes only slightly inwardly due to a shocking trial she endures. It was one of craziest things I've read that was completely plausible. I could see ancient earth peoples doing these rituals no matter how crazy they seem to us now.
The book drags between maybe chapters 5 and 13. There is a lot of narrative and explanation that bogs it down, but it is cool history of Vira. But once it picks up, the story progresses and builds anticipation. I was up to 3 a.m. reading and only stopped because my phone battery died. The ending was a little quick. I kinda thought it should have been extended. I wasn't expecting what happens between Ama and Mel, especially after all the build up. I gave it 4 stars for the entertaining world building and interesting plot. I couldn't give it 5 because of the slow down in the beginning set up, and because the climax and ending, although satisfactory, left more to be desired. But I had to accept the ending no matter my or Mel's personal feelings on the matter. There were also several characters that I felt needed more purpose or could've been left out altogether. Overall a good read. 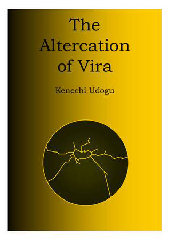