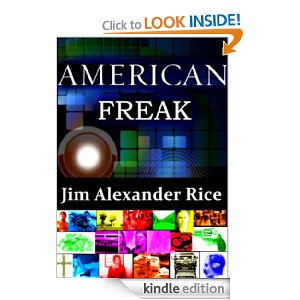 American Freak from The Young Saints Series by Jim Alexander Rice is about three guys who do what a lot of us would like to do: clean up the crime in America.

Miles Seymour Dane is our narrator through the escapades of three young men over a year of “citizen’s arrests,” thousands of dollars of reward money and good intentions gone wrong.

Miles, Herb and E.R. decide to go after the FBI’s Most Wanted list. Each chapter is a written account of events of each capture. Miles has an exceptionally high IQ and has a photographic memory and little respect for authority. He seems to always look for trouble. Herb’s technology know-how and ability to get just about anything contributes greatly in their searches. E.R. is the muscle.

When I first started this book, I had the image of a Law and Order episode. Miles recounts the date, time and place of every capture. Due to his photographic memory, if Miles mentions something like a song he cites the author and year. This is done pretty consistently in the first couple of chapters. As the story progress, however, these details start to slip. Miles starts to record occurrences that have nothing to do with the captures but more to do with their lives which changes the feel of the story for me.

The story becomes more about a group of barely 20-year-olds with a lot of reward money and hardly any wisdom. Their good intentions become lost in too much money and time, and disillusionment with the American justice system.

The characters are diverse. We get background on Miles and E.R. however Herb is a mystery. I suppose readers will find out more about him in later books. He seems to be the one with the skills, connections and know-how while the narrator Miles just seems along for the ride. I thought Miles should have had a more proactive role besides recording events and spouting facts. I’m still trying to figure out his contribution otherwise.

The setting mostly takes place in the California area where the three vigilantes set up headquarters although Miles is from the East Coast. There is nothing about this setting or the other places they visit in rapid succession that contribute to the plot.

The plot does get preachy in parts and becomes a speech rather than fiction. The narrator says this in the first paragraph:
“If I were you I’d stop reading right now, at this very moment. There’s no reason to get involved with it all, because in the end it will only infuriate you. You will see everything we had done and not like the outcome. Not one bit.”

I will agree with the narrator, I was not happy with the ending—not because it wasn’t exciting—but more of the “What are they thinking?” variety. Still, American Freak is worth a look. Reading would be boring if the characters did what the reader thought they should do. This is a different read for me and not something I would normally pick up, but I recommend it for a quick read. It’s a “what I wish I could do and say” kind of adventure. For mature readers only.