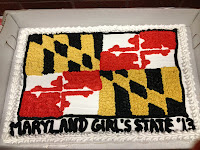 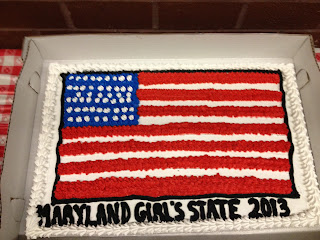 GIRLS STATE REVIEW BY TASHANICOLE
A weeklong adventure packed with tons of information about our local and national government, Girls State was an experience I do not regret. I made tons of new friends and learned a lot more.
We all had the opportunity to run for official positions. I was the states' attorney for the mock trial held Friday morning, and I was elected the position of a city council member. I also ran for county Sheriff, but many people also ran, and I lost. But I helped our Alternate Senator win her position and helped my other friend campaign for Governor.
The week has left me extremely tired (which is why this is such a short post), but definitely not hungry; the food was great! I took away some key things from the experience, and many people found passions for the government and politics they did not know they previously had. Many only went because it looks good on college applications and ended up having the time of their lives. I would definitely recommend this program to high school juniors because who knows, you could end up being one of those people whose lives are changed (for the better) by attending.

BOYS STATE REVIEW BY QUENTIN KENT (taken from Facebook!)
Boys State was one of the best, if not the best, experiences of my life. While the hours were very long and the content trying at times, it made me a more respectable, intellectual, and obedient young person. Most importantly, it made me a refined and proud American. We often take this random and lucky attribute of being born an American and do not grasp the depths of its meaning. I have now talked to veterans who have nearly died for our flag, the symbol of freedom. I have seen people who, despite still being in high school, dedicate their lives to being politically educated Americans or even more honorable, i have seen others my age in ROTC programs. These brilliant young men are willing to give up the lifestyle of a regular teenager in order to prepare to defend my rights and yours, which happen to be some of the most sought after rights in the entire world. Please honor these brave, humble, and oftentimes unsupported heroes by thanking them for their efforts. Please, if you have children that are going to be juniors in high school, enter them into the boys state program. Most importantly of all, please VOTE. This is the sole responsibility of an American. It is DISGUSTING how low voter turnouts have been in recent years, and i have no problem saying you should feel ashamed if you do not take advantage of this precious right that millions have died for, a right that many countries have war for, and a right that in the absence of, you would have no say in how the government controls your life. It is a disrespect to all troops, dead or alive, to not participate in this quadrennial event. Look at a soldier with a missing arm, a soldier separated from their family in a foreign land, a soldier wearing the stars and stripes of America, and tell them you didn't vote. They will feel as though all they have done is in vain. Please always vote. Wake up every day and think how lucky you are to be an American. Look at the flag humbly. Thank all troops and government officials for serving you, the people of this prized land. Boys state teaches you RESPECT, INTEGRITY, and EMPATHY, three characteristics that will make any person patriotic. By investing yourself (if you are not yet a junior) or your child into this, you are investing into the future of America. This week, I have absolutely no doubt that I was surrounded by future delegates, senators, congressman, doctors, lawyers, and military leaders. The people there were collectively the most respectful, intelligent, and honorable young men and adults I have ever met in my entire life. Graduates of Boys State really are going to be leaders, heroes, or successful in anything that they pursue, and for that reason I feel honored to be one myself. I started this week a blind and naive person. With teamwork, dedication, and a few tears, I ended a true American and a leader. Thank you for reading this, thank you to any fellow boys staters, thank you if you serve me and other Americans in government as an elected official, and thank you if you are a soldier. If you invest in boys state, there will be no regrets or hard feelings, but instead honor, joy, integrity, respect, empathy, success, and a better you. May God bless voters, government officials, troops, and anyone else who helps uphold what it means to be an American. May God bless America.