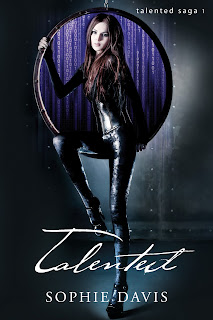 Talented by Sophie Davis is the first in the Talented series. Natalia Lyons is only eighteen, but at the McDonough School for the Talented she is an exceptional Mind Manipulator (she can read and influence others’ minds). Her only goal is to enter the Hunter program with TOXIC, a government agency, and avenge her parents’ deaths.

The book takes place during her Senior year which is her Pledge year, where she trains with a team and prepares her for her solo mission that will determine whether she graduates and becomes a Hunter. It doesn’t help that she is one of only a few female Hunters. Things are also complicated when Talia’s love life begins to interfere with her training.

Talented flows well and Talia has an easy voice to follow, so it is an easy read. Talia’s character is tough, yet vulnerable enough to identify with. I was able to get a pretty clear idea of who she was. The supporting cast is decent although some secondary characters didn’t differentiate in my mind. I would have liked a clearer image of Donovan, her best friend and boyfriend, who is also a Hunter with TOXIC. When I finished the book, I had to go back and skim to remember what Talent he had.

The setting is detailed and convincing. It takes place in a future where the Talented have telekinesis or can morph into animals among other cool “powers.” I was impressed with the details of everyday life as well as government involvement in the setting and the plot. I think it is the details that give this book credibility. There were several times that I felt like, “Oh, I didn’t think of that. Good point.” These were things that I would’ve easily overlooked, but then after thinking back I would want clarification on. The author was really on top of these minute details.

Talented also has a lot of action in it and the scenes are clear and well paced. It has you glued to the page throughout. There are places where it slows as we follow Talia through training and such, but it overall keeps a good pace.

The dialog is realistic and playful or intense when it needs to be without being theatrical. There is a good deal of dialog that occurs in Talia’s mind. I thought it was handled pretty well. There are only a few parts that seemed weird about it.

I didn’t give it 5 out of 5 because there are times that the plot does push it a little bit and there is a revelation that I did not agree with. However, I enjoyed this story and I’m looking forward to the next book in the series to see how Talia handles all the information she gained in this first book. I recommend this book to readers who like science-fiction, romance and espionage. There are some really cool gadgets in there.