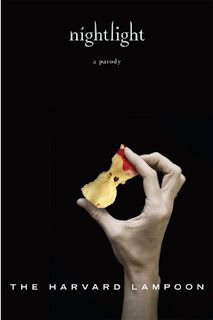 Click Here To Download The First Chapter
Title: Nightlight: A Parody
Author: The Harvard Lampoon
Published Date: November 3rd 2009 by Vintage
Summary: About three things I was absolutely certain. First, Edwart was most likely my soul mate, maybe. Second, there was a vampire part of him–which I assumed was wildly out of his control–that wanted me dead. And third, I unconditionally, irrevocably, impenetrably, heterogeneously, gynecologically, and disreputably wished he had kissed me.
And thus Belle Goose falls in love with the mysterious and sparkly Edwart Mullen in the Harvard Lampoon’s hilarious send-up of Twilight. Pale and klutzy, Belle arrives in Switchblade, Oregon looking for adventure, or at least an undead classmate. She soon discovers Edwart, a super-hot computer nerd with zero interest in girls. After witnessing a number of strange events–Edwart leaves his tater tots untouched at lunch! Edwart saves her from a flying snowball!–Belle has a dramatic revelation: Edwart is a vampire. But how can she convince Edwart to bite her and transform her into his eternal bride, especially when he seems to find girls so repulsive?

Complete with romance, danger, insufficient parental guardianship, creepy stalker-like behavior, and a vampire prom, Nightlight is the uproarious tale of a vampire-obsessed girl, looking for love in all the wrong places.
Reviewer's Thoughts, have a piece of my cake:
Technically. Basically. Honestly. I love this book with all my heart (that was corny...). If you watched that movie, that parody of Twilight movie - Vampire Sucks, you'll probably realize that the directors are just telling the entire story again, in a funny way. As for Nightlight, it's a completely different story, with some elements in it that'll make you think of Twilight. Now, that's original! Before you start reading - Kristen Stewart/Bella Swan fans, she can be a bit obsessed and over herself in this parody (she thinks everyone is seduced by her charm), but don't hate her. :-)
My Ratings: 5/5 (love is in the air)
"I should have known he wasn't a vampire. He failed to meet the three telltale criteria for vampirism: speaking in an old-timey way, being pompous, and having sparkly skin."
Posted by Shu Ni at 10/16/2010 01:57:00 AM