Beyond the Grave Book Review 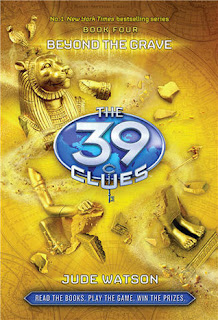 Beyond the Grave by Jude Watson is the fourth installment in The 39 Clues book series. In this installment, Amy and Dan Cahill are in Cairo trying to find the next clue. They are being pursued by Irina Spinsky, their Russian cousin and a number of other Cahill cousins. The children are constantly on the move, taking flights to various places in Egypt. They are also getting messages left for them by their deceased grandmother Grace.

This book, as like every other in the series, is written by a different author. I could really tell the difference in the writing. There is more emotional development in the characters, and not just the Cahill children. Irina Spinsky also seems to be fighting that "weakness" called emotion.

Amy and Dan are fighting each other while trying to hold on to the loving image of their grandmother in the face of the "evil" they find out about the Ekat branch of the Cahills. It is especially hard since they still don't know their branch. They begin to question why Grace never told them about the hunt for the 39 clues or prepared them for the race. Or did she?

This installment was just ok for me. Amy and Dan did some really dumb things that get them either caught or giveaway their leads on the clues. But that is to be expected because they're always being watched whether they know it or not. I'm just waiting for them to get a bit more savvy about it. There are too many convenient "saves" for Amy and Dan. I would've liked them to get themselves out of trouble. Also, I could not follow the clues as well in this book as I did the others. I had no idea what the clue could have been or where to find it.

Overall, it was an ok read. I did learn about Nefertari and some other Egyptian queens I had never heard of. I learned many Egyptian words for food and boats and things like that. I also learned that there is a Rosetta Stone. It made me feel really dumb not knowing about it, but more educated after I searched Wikipedia for it. That's why I like reading books like these. I get to learn history in a fun way.