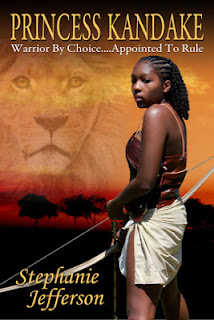 Princess Kandake: Warrior By Choice...Appointed to Rule by Stephanie Jefferson follows the story of Princess Kandake, one of four of King Amani's children. In a kingdom rich with culture, wealth and peace, girls can grow up to be artisans, warriors and even queen. Kandake desires to be a warrior and worries that Great Mother will not choose her to be Prime Warrior to the kingdom of Nubia. What she fears most comes to fruition when Great Mother not only doesn't name her Prime Warrior, but she instead names her the next Queen of Nubia. How can she be what she's been called to be while being who she was meant to be?

Princess Kandake is full of rich sights, aromas and sounds. It skillfully captures the feel of the Nile and the kingdom of Nubia and her people. It is a very peaceful and loving kingdom. Everything and everyone acts with respect and discipline above everything else even in the face of adversity and death. Princess Kandake's family is loving and supportive. The royal children rarely do anything to shame themselves, their family or the kingdom. Nubian warriors are the epitome of warrior without match.

Rumors of war surface, and then Kandake's elder brother Alara goes missing from a hunting trip. Tough decisions must be made to avoid war, maintain alliances and locate her brother. Kandake and her remaining siblings get a crash course in being leaders of Nubia. She in turn has to struggle with her warrior instincts and her role as Nubia's next queen. Her character is tested several times and she grows in reconciling her desires with what is expected of her.

The different characters, from Kandake's brothers to Great Mother to best friend Ezena are simplistic. They serve their purpose, but really stayed somewhat vague. I didn't see a difference between Alara and the other brother Natasen in speech. We were told that they were different instead of shown. Although Princess Kandake's sister Tabiry becomes a source of conflict, she is nothing more than annoying rather than an actual adversary.

The descriptions of Kandake's home and way of life are vivid, including sounds and scents. One thing that I was impressed with was the description of how an animal was deemed "healthy" by scent. I thought that kept well with the time and place of the novel. Nowadays most people couldn't tell much about nature except what we see on PBS.

Also, even though the story is set in the past, the speech is not so archaic that it is hard to follow. This is an easy read with quick chapters. Princess Kandake is well put together with some great description, and enough action and adventure to make it an interesting story.

On the downside, the "perfect" life of Nubia depicted, and the resolution of problems and conflicts are a bit too utopian. It lacks the drama and feeling of urgency and danger to make it truly great reading. For me, the conflicts did not elicit enough emotional response. However, with an open-ended conclusion, Princess Kandake may face greater dangers in the future that will draw me closer to the characters and their plights.

I would recommend this book for a quick read. Ages: 11+

I was provided with a copy in exchange for an honest review.