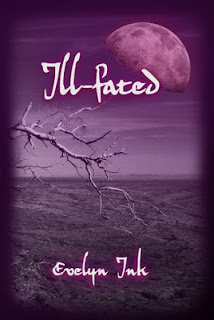 Ill-fated follows Leila as she begins a perilous quest to prove her worth and right to rule as the heir to the Bainland throne. At only fourteen, this would seem like a daunting task, but every ruler before her has done the same at fourteen. Leila has been training for this for most of her life. It should be routine, if a bit dangerous, except the falling star that is to determine her course falls dead South. Southland is rumored to be full of dark magic and unsavory characters. So Leila sets off with only her awesomely fast horse, an unlucky number and a chip on her shoulder.

In Southland a boy about Leila's age has been wandering around with no recollection of his name or orgins. Each day he awakes without a memory of the day before or anything about himself, but strangely has general knowledge of Southland, figures, and writing. The captain of the ship he's on calls him Sam. But "Sam" is sure that's not his name nor does he belong with the crew that seem a lot like pirates. After jumping ship, Sam meets an old woman who helps him realize that he has a mind-lock. Until he can find someone to remove it, he will never remember much.

So Sam sets off to find help after a "sapping" that only temporarily clears his head to remember more than one day. His quest crosses Leila's quest and adventures abound in this dangerous frontier-like land of Southland where towns are a day's ride on horseback from each other, and it's legal to kidnap unescorted children and sell them into drudgery.

I really liked this book. In the beginning, the reader only gets vague directions on what her quest is, and like Leila we have to learn as we go. I absolutely loved Leila and Sam's characters. Leila is a strong female hero without being inaccessible or overly tough. She has some vulnerablilities that make her believable. Sam is optimistic but realistic in the face of his limitations. He comes up with plans and is very smart and perceptive. He also has a cute sense of humor especially with Leila. They have great chemistry. I am looking forward to their next adventures. I wasn't ready for the story to end. I was actually surprised when it did end. I thought the ending kind of jipped me. Not to give away too much, but the heroes didn't get their due in the climax like I thought they should have.

The plot is exciting and moves well. All goals are accomplished in interesting ways. I've been paying attention to world building and the author has built a well thought out world. It is filled with things we know but with uniquely different names and twists. The "magic" in Southland is inventive.

There are some plot details I wondered about with characters introduced early on and their roles later in the book. The old woman whom Sam meets, Captain Oren and Ash don't seem to have their stories complete or their actions clarified. However, these and other characters are entertaining and have distinctive personalities.

Descriptions were colorful and there are just enough of them. As the landscape changes, I was able to keep up because it is gradual and presented well.

I would love to read more adventures with Leila and "Sam". Waiting for "adventure and romance on the high seas!" 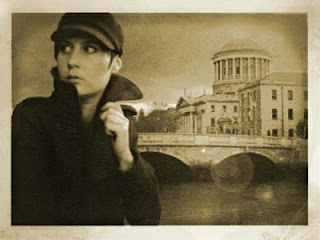 Author Bio: The plaque on my lawn reads the Edgington Mansion, it was once thought to be lovely I suppose, though now rather decrepit and quite full of secrets. I live here with my husband. He is a philosopher, and quite mad. Our house is full of books. Stacked, piled, and always advancing out and away from the shelves that ought to keep them in. I paint and draw, write and read, and occasionally go down into the dark, dismal, cobwebcreepy dungeon, to do laundry. If interested, you may choose to follow me on my blog or check in with me on facebook. However, due to my absolute terror of electronics and a crippling phobia of the social media (technical term: Socmephobia), my blog posts tend to be infrequent and erratic. Also, due to several post exile investigations I am generally prevented from giving any specific information regarding my whereabouts ...
Posted by Cherese Vines at 11/14/2012 02:00:00 AM