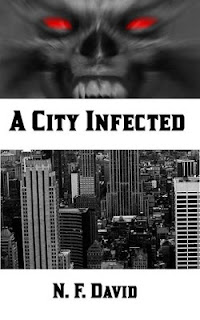 A City Infected by N.F. David

Kyle Runner is a cop for the sole reason of supporting his daughter even though they have a strained relationship because of his separation from his adulterous wife. Kyle lives in New York City years after it is infected with a virus that produces a variety of zombies. Instead of running and hiding like in typical zombie movies and books, the humans have adjusted. They are armed and most times more dangerous than the infected. A corporate giant, Crest Hominal, has emerged and the government is a joke.

Kyle is infected in the first chapter. He hopes to be gunned down by the chief of police thereby securing the pension that would take care of his daughter after his death. But Kyle doesn't get gunned down and he doesn't become a zombie. (There is a great surprise here.) He instead enters the twisted world of Crest Hominal.

I really liked the world building. This is a very creative New York City. I liked that the people are not holed up in the country surrounded by a fence waiting for food supplies to run out. People are living everyday lives--even if it's a bit twisted. Of course New York City is cut off from the more desirable infection-free places beyond the "fire." (There is great description and foreshadowing about it that I liked a lot.)

In the infected area you do what it takes to survive even if it means becoming a police officer. Corruption is everywhere, goes from top to bottom and everyone has an opportunity to rise. Kyle takes his opportunity to rise in Crest Hominal for his daughter while still trying to be the "good guy." Kyle is funny and has a twisted sense of humor. ("Twisted" --There's that word again. Seriously I couldn't think of another more fitting word.) I was laughing out loud at the stuff he was doing and saying. My favorite was when he went to see Senior and did his own pat down. You have to read it to know what I'm talking about. I also enjoyed the "monsters" and "superpowers."

As far as the storyline, I had to knock off 2 stars: One because I had an overall feeling that I was missing a lot. I attribute this to Mr. Northington, a genuinely unique character that spoke like a walking dictionary. I could've liked him but he frustrated me. I could only guess what the heck he was saying for a large portion of the book. I would have never finished reading if I stopped to look up every word he said. Even then, I honestly don't think I would've understood. He was an essential character and that's what frustrated me the most. I got the jist of what happened, but I felt out of the loop on what was going on underneath it all. I really would've liked to know.

I took off the other star because I didn't really know what the plot was. Kyle's driving force was his daughter, but I had no clue what he was supposed to be doing to secure her future. Although all the places and people he met that involved his "job" were entertaining, I still didn't get all of it. I chalk some of that up to Mr. Northington's impressive vocabulary. Then Kyle risks everything and faces "monsters" for what? Ask Mr. Northington because he has all the answers. Maybe I should've put his dialog in Google translator. (smile) But seriously I thought Kyle should've come out better in the end hero-wise. I think he gets jipped.