Aversion: Book One of The Mentalist Series, Book Review 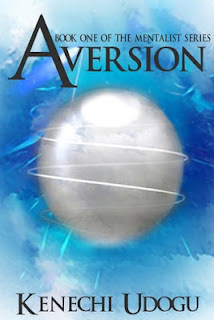 Aversion, Book One in The Mentalist Series by Kenechi Udogu is a novella following the first Aversion performed by Gemma Green and how it goes oh so wrong. Fifteen-year-old Gemma is the only female Averter in a long history of Averters, an anomaly. Nonetheless, she has been taught from a very young age the responsibilities, honor and rules of Aversion. Averters use their minds to deter others (without the person realizing it) from decisions that will keep them from their life path.

When Gemma gets her first "jolt" from Russ Tanner, she is confident and a little nervous. But this is what she is born to do. Everything seems to have gone well with Russ--disaster averted. That is until Russ approaches her at school the next day. She has never talked to him before and has kept a low profile at school, but now she can't shake Russ. He doesn't remember the Aversion, but for some reason he feels drawn to her. What else can go wrong?

Gemma is a down-to-earth character that tries her best to live up to her legacy. But being a teenaged girl just gets in the way of duty sometimes. The reader goes with Gemma on her journey to becoming a full-fledged Averter (and not just a trainee) and her journey into the world of the average teen. She is believable, if a bit too analytical. The story is Gemma's first person account, so she's already been through the adventure that she's relating to the reader. The only thing that bothered me was that because it's already happened, she inadvertently reveals minor plot points.

Description is minimal and other character development is scarce. We get to know a little about Russ and Gemma's father, but we're not yet sure what is true about either one of them. After all, we're dealing with Aversion. But there is still more to uncover.

I liked this first installment in The Mentalist Series and recommend it for a quick read. I look forward to the next installment.

I was provided with a copy for an honest review.