Have You Seen Her? Book Review 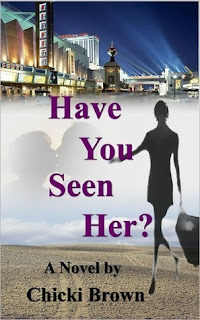 Have You Seen Her? by Chicki Brown follows Marcia Hadley's escape from her fabulously wealthy but abusive husband. Forming a new identity as Dani Reynolds 3,000 miles away, she takes a job as a cocktail waitress at a club called Frenzy, hoping to stay off the radar. But the club's bouncer Taylor has set his sights on her. To her surprise, Dani finds herself looking right back.

This book has a good premise although it is predictable. Readers will definitely get their money's worth just in the word count alone. This is a LONG book. I was surprised how long it was for a romance. I was exhausted a third of the way through the book. The writing is clean, consistent and clear. It is also tedious. It follows Dani through each and every action of each and every day...well practically. I would have cut out a lot of her day-to-day activities.

The plot kept me on a seesaw of interest. For example, the idea of her husband finding her, her attraction to Taylor and sparse intense altercations creates tension, but then the volume of text devoted to Dani's day-to-day activity stifles the progression.

Dani is a strong female character from the beginning, so I did not see much of a change there. Her perception and reaction to Taylor is the only thing that really changes. I think her transformation happened before she even left her husband. But this book describes in detail Dani's growing relationship with Taylor. Every thought, every conversation she has with her neighbor Fanny or friend Sonja is purposeful and reveals much about how she's feeling and provides her with much needed advice.

Taylor is a complex male character that has a lot of rich background. As the story progresses we find out his character and his motives are greatly tied into his past. It really should be Taylor's story to be honest. He's the character that grows the most.
We hardly get any background about Dani beyond the fact that married into wealth. In fact, we don't get any idea about her family until we're deep into the story. I thought that odd because it isn't explained why she doesn't contact them until 75% through the plot.

The other characters do their jobs creating tension or providing advice. However, I didn't care for how everything just works out for everyone, and all previous animosities are resolved. That seems unrealistic. Not everyone is going to feel ok about every situation, especially when it deals with matters of the heart. Nor will they voice their change of opinions so articulately.

Speaking of talking, the dialog is realistic for the most part. Yet, I do think Dani and Taylor speak a bit too freely about the details of their relationship to their friends. I also think the coincidences are a bit much. What is the likelihood that Dani would find so many people in her small circle who identified with her situation? But I guess you can chalk it up to the statistics of domestic violence in the area where Dani chooses to live.
There are a few proofreading errors but it doesn't distract from the reading. The setting is described enough to get a good idea without lingering too much. The romance is sweet. There is nothing over the top. It is tastefully written.

It was hard for me to decide on a rating. Like I said before I was running hot and cold on this one. I don't need a lot of action in a romance, but it has to have a good pace. I think what bothered me the most was the slow pacing of the story. All the details and in depth thoughts of the characters and their backgrounds are great to know. But much of it should have just been left out.

I think this would do well as a TV series or mini series. It reads more like that with mini issues popping up that really have nothing to do with the overall plot. But we would watch to the end for the big deal, which for romance novels is the two main characters getting together.

I would recommend this book for a leisurely read like the novels of the 18th century that had description that went on for pages and pages and people had time to enjoy it.

Labels: book review, chicki brown, have you seen her