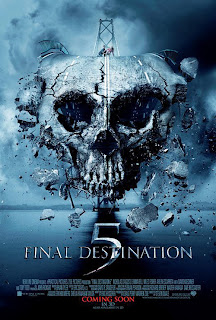 
My Thoughts:
I watched Final Destination 5 a few weeks ago at a friend's sleepover/birthday party. It starts off by this guy having a "vision" of the bridge collapsing and everyone except his girlfriend dying. Then, once it starts to happen in real life and he realizes it, he saves himself, his girlfriend, and 6 other employees of the company. But you can't cheat death. One by one, in order of how they died on the bridge accident's foreshadowing, the 8 remaining victims start to die by tragic accidents. Sam and Molly seem to make it out alive until they board the plane that starts the Final Destination 1 movie, bringing all the Final Destination movies together.
This was my first time ever watching a Final Destination movie, so I didn't know that they were all connected, as it seemed to have been at the end. Shirley and Gabby, my the birthday girl and my other friend, were disappointed in how all the Final Destinations seemed to follow the same plot line with a different starting accident. But isn't that how all movie series are? But apparently this one was much more bloody than the others.
Since we were all together in a group at a party setting, it was definitely more like just watching a movie with friends who talk loud and eat snacks and you don't really get too into it, so you don't seem to get as scared. I wasn't scared at all during this whole movie, though parts of it, like when the girl's eye popped out, did freak me out a bit and I had to look away because it was so disgusting. But instead of being scared, I actually found myself laughing at times. We all did. I'm sure that that was just because I was with my friends, whereas if I were alone I would be scared out of my wits, right? Or was it just a funny movie? That's for you to decide if you ever watch Final Destination 5.
I must stress to you all though that it is Rated R so, only watch it if you are old enough / mature enough and/or have parent permission.
Posted by Tasha Nicole at 3/24/2012 04:40:00 PM