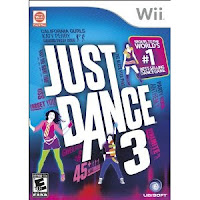 "Santa" brought this for the family this past Christmas. We played it all Christmas day: from 9am until right before dinner at 6pm and then after. We love it!
I had seen a commercial for Just Dance with Dora the Explorer. I was thinking that this would be great for my daughter because (1) she loves to dance, (2) exercise, and (3) this was something active we could do when it is cold or raining out. I read the reviews for the Nickelodeon version and a lot of reviewers did not like the game because the real artists were not singing and the kids dancing on the game were kind of "creepy." Many recommended just getting the regular Just Dance.
"Santa" got ours from Target and the guy behind the counter recommended getting the latest version which was Just Dance 3. Although it did not have my daughter's favorite song on it, she has found many others that she likes including Laura Bell Bundy – "Giddy On Up (Giddy On Out), and Kiss - "I Was Made For Lovin' You." My favorite dance is the Mash Up for Promiscuous by Nelly Furtado featuring Timberland. That may have something to do with the 70s guy who dances on the chorus. He so cool.
Anyway, the game is divided between playing songs and a sweat session where you can use it as an exercise regiment. There are also games where you have to freeze or shake the Wii remote in the middle of a song or risk losing points. You can earn points to unlock "gifts" and earn medals. "Gifts" include Mash Ups which blend together several different dancers from other songs into one particular song.
Value: It was on sale at Target for $35 before Christmas. I thought it was reasonable for 40 songs. Although this is my first experience with this type of game, I thought it was well put together. Some of the 40 songs are weird and we only have done them once, but the majority are good. Great dancers (from a non-dancer opinion). Three or so of the dances are awful and boring. But that's pretty good out of 40.
Fun Level: High. It doesn't feel like exercising until you're sore the next morning. It has single dancers, duets and group dances from 4 to 8 players. For the 4+ players, additional players have to hold the controller with another player. But I don't recommend you play the game every day. Just like anything else, it can get boring. But then you'll miss dancing when you hear the song on the radio and start doing the moves in the car. :-)
Difficulty: Easy to play and navigate (my 6-year-old does it). Not so easy to earn points as you need coordination to follow the dancers as if they are your mirror image. But just move the remote and sometimes you'll get points.
Features: You earn "Good" and "Perfect" by how well you follow. It gives you feedback throughout the dance. It also lists the words to the song and diagrams of the upcoming moves, all of which you can turn on and off whenever you like.
ESRB Rating: E 10+ There are some songs and dances that my 6-year-old daughter does NOT play because of dance moves. Period. But the curses are removed from the songs.
Highly recommend: I give it 4 out of 5 only because I wanted a greater variety of "add-on" songs from the Wii store. However, I like it and even convinced 2 of my sisters to buy it.
Posted by Cherese Vines at 3/04/2012 12:32:00 PM