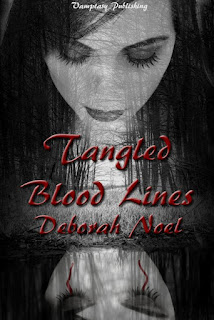 Summary: (Goodreads)
This is not your sweet sparkling vampire story. Oldschool vampires have resurfaced, responsible for brutal murders and more blood than anyone can cope with. In "Tangled Blood Lines", Cianna Fitzgerald, a young but "retired" crime scene investigator, finds herself back in a world she walked away from some years ago. She grew up in twentieth century Pennsylvania countryside knowing she possesses superhuman powers from her "Irish pixie" bloodlines. She had retired after a particularly tough case where the victim was her husband's twin brother. After her brief respite from murders and homicides, Cianna witnesses a killing where the murderer is a vampire. Her daughter goes missing soon after the killing. Cianna and the love she had once pushed out of her life, her estranged husband Declan, travel halfway around the world to try to save their child. As the mystery unravels, she learns that although she is a halfbreed, the other half isn't "Irish pixie" as she grew up believing weaving her into a more tangled history and frightening future than she had bargained for.

My Thoughts:
First off, let me just say, what a cliffhanger ending!!! I knew that it was going to end on a major cliffhanger when I looked down at my kindle and saw that I was 90% through the book, but it seemed like it was just getting started. As Cianna mentioned repeatedly in the book though, there are always more questions. She was right. This book leaves me with more questions than answers and I truly hope for and cannot wait for the next book to be released!!
Okay, so let me get down to the basics now and tell you all what this story was about. Cianna is a 29-year-old retired crime scene investigator who is constantly having nightmares about these six murders that she was hired to investigate that were never solved. She has a 4-year-old daughter, Mattie, and her husband, Declan, doesn't live with them. One day her Uncle Sam comes up for a visit and convinces Cianna to look back into those six murder cases, since they were never solved. Her and Declan get back together and all is well for the family.
But then, Cianna witnesses a vampire murdering a young girl. Later, Declan and Cianna both witness the same vampire kill a couple. Then Mattie goes missing. This is when the chaos starts.
With the help of Remmie, a vampire, Shane, a wizard, and Brae, a witch, Cianna is able to solve the six unsolved murders, but more cases involving vampires arise and by the end of the book, you are still left with many unanswered questions. Will Cianna ever get Mattie back? Will Brae be caught by Oxmeade? What will happen with Remmie? So many questions, yet no answers.
This is why I need another book in the series.
But, back to this book, I honestly started this book two days ago and was unable to put it down since. It is definitely a book for more mature people, as some parts are definitely scary just reading it, and other parts get  a little sexual.
I think that Deborah Noel did an absolutely outstanding job with this book! She included such detail, but it wasn't so much that people would be like "OMG Too much nonsense. This is boring!!!" Not at all. And the plot flowed extremely smoothly,  unlike some books where the plot is choppy. I applaud Deborah for her fantastic work. I most definitely look forward to reading more books by her.
Posted by Tasha Nicole at 3/25/2012 06:43:00 PM