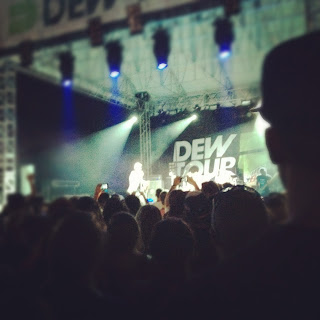 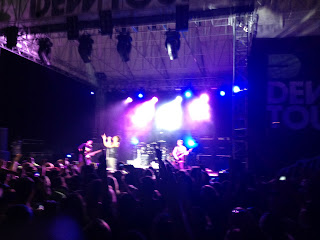 The main concert for this year's Ocean Championships for the Dew Tour, held in Ocean City, Maryland, starred Theophilius London and Lupe Fiasco. They were both really good, and I was genuinely impressed with their music. They were both really good singers/rappers.
There were a lot less people at the concert this year than there were for the Kid Cudi concert at last year's Dew Tour. There was also a lot less weed (there were only a few people smoking it at this concert, whereas for Kid Cudi it was so bad I had to leave before the concert was over) and there wasn't much crowd surfing, only a couple people. Most people were even sober! It was definitely a better atmosphere than the Kid Cudi concert, even though they were both free at the same place, with just a year difference.
The bass was really good and people were dancing and having a good time. The volume was nice and loud and they had giant screens up around the stage, so even if you weren't close, you could still see and hear what was going on. Kaitlin and I were only like 15 rows, maybe less, from the stage, so we could see everything and didn't need to look at the screens, but my grandmother, who was sitting on the boardwalk, could hear the entire concert and see everything that went on on the stage. She usually doesn't like rap/hip-hop, but even she enjoyed Lupe and Theophilius.
I had a good time, and if they ever came back with the Dew Tour, I'd definitely see them again.
Posted by Tasha Nicole at 9/03/2012 12:07:00 PM