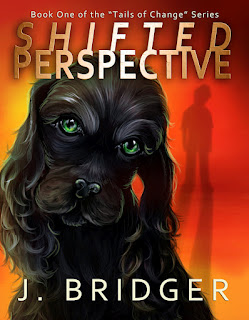 Shifted Perspective by J. Bridger is about eighteen-year-old Caleb Byrne. Everything is going well for his senior year of high school. He’s been accepted to his first choice college, Duke University. He has a great girlfriend who is going to college near his. And his father is supportive and actually pushing him out of the nest even though Caleb is concerned about his father being alone. Then he wakes up as a Cocker Spaniel. Well, he’s only a dog for one day out of the month, but he has no ideas what’s going on. Caleb makes the difficult decision to turn down his dream college and distances himself from the love of his life. But things start to look up (sort of) when he realizes that his change to a dog is normal (for him at least) when his cousin shifts into a Cocker Spaniel right before his eyes. Now Caleb realizes why his mother left her family almost 20 years before and left him and his dad six years before. He is a shifter unlike his mother who was only a carrier; and she left without ever telling him anything. So Caleb spends the summer in L.A., 3,000 miles from his North Carolina hometown learning how to shift and the rules of a secret werewolf and shifter culture. But even in a secret society there are deeper mysteries.

The story was entertaining. The summary peaked my interest about a guy that turns into a Cocker Spaniel. I won’t give away too much, but the shifter culture that Caleb enters is well thought out. There is a hierarchy, rules and customs. There are some things that are kept vague in the story. For example, Caleb’s mom is mentioned throughout, but many details about her family are not elaborated on. I assume this is because this is the first book in the series called The Tails of Change, and there will be more to come.

The book is divided into three parts. The first is Caleb’s normal life. The second is his life after shifting and his acclimation. Caleb is pulled into a mystery in the third part. Caleb is funny and has a dry wit. He’s a smart-aleck and it gets him into trouble. Although he does make light of many situations, some of it sounds like a lot of complaining. For someone who has rarely flown on an airplane, he had a not-to-flattering opinion about airplane service, food and recycled air. It got annoying at points where I just wanted to say, Take the bus then! It was just a little too much in some sections. Then there were parts that sounded a bit offensive, like Caleb making fun of his uncle’s Greek accent and his possible ties to the mob. But as the author explains in the summary, the book was written “tongue-in-cheek.”

There were other parts where Caleb was just obtuse about his shifting condition. Things that were just obvious to the reader, he took several chapters to figure out. Like when he talks repeatedly about how his mom left and how weird his mother’s sister and family were. But when he turns into a dog and finds out that it didn’t come from his dad, he doesn’t even entertain the thought that it could have come from his mom’s side of the family.

The other characters were pretty standard one-dimensional. His girlfriend is the nosy reporter. His dad is the laid back but supportive parent who lets him do pretty much whatever he wants. His cousin Kalista is the typical L.A. rich girl. Caleb’s nemesis Peter is a jerk because he can be and torments Caleb even before he finds out that Caleb is a runt (late shifter), the lowest level of shifter. The only secondary character I had a hard time putting my finger on was his mother’s sister Aunt Moira. There was something else going on with her. She appeared to be just following the pack culture, but I’m sure she could hold her own if she had to.

Caleb’s hometown of Mt. Airy is described thoroughly in the beginning. But when he goes to L.A., we get only a little. Granted he grew up in Mt. Airy and had only been in L.A. a couple of weeks. Also, the book is in first person so there are mostly generalizations about places Caleb is not familiar with yet.
The book was an easy read. However, there were some parts that I had to re-read to understand. I think this was because it was written as Caleb would speak, so some of the inflections in his speech were not easily discernible. If it was an audio recording of the book, his sarcasm and wit would’ve come through more clearly. Also, as a personal preference, I was a bit concerned about the certain choice of words in a YA book. Examples were using the Lord’s name in vain and the use of terms like “butt monkey” I didn’t care for.

The plot moved along pretty well. There were parts that seemed a bit convenient. For example, someone gives Caleb information that although I wanted to know, I wondered why they were even telling Caleb. It seemed out of character.

The feeling I got from Shifted Perspective was the challenging of social, class, gender and even species (smile) issues. Caleb is from a working class, modest income background while his uncle and aunt are well off enough to send three of their children to Oxford and the other to UCLA all at the same time. Then there is a species issues. Even though they were all shifters, there is a hierarchy with werewolves at the top and runts at the bottom. There is also tension with shifters when it comes to humans. Caleb, who was raised as human and had no idea about this secret culture, has a hard time accepting and adjusting to it. I think this fact alone will change the course of the shifter society. It seems adequately titled The Tails of Change. Change is definitely coming. Hopefully, many of Caleb’s prejudices will change and maybe so will the superiority complex that the shifter community has against humans. They even like regular non-shifter dogs better than humans. Well, we’ll see.

I liked that Caleb was relatable. He was uncertain and honest about it and his other feelings. He still remained true to himself and his human side when everyone wanted or expected him to change. His character does grow. He’s has a strong bond with his dad and is not ready to leave his father. He has a hard time figuring things out for himself at first especially with all his adjustments. His journey into shifter culture parallels his transition into adulthood.

Shifted Perspective was a good read, humorous and I’m looking forward to the next part of the series. There is a relationship between shifters and dogs that I thought was pretty cool too. I would recommend this book to those who like their paranormal with a bit of humor.