Dawn of the Hunter 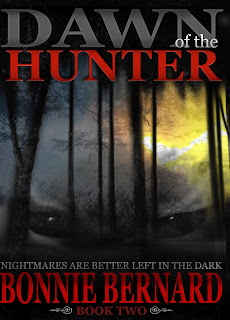 Title:
Dawn of the Hunter

About the Author: (book)
Bonnie Bernard is an alter ego of a feisty redhead who lives in the Rocky Mountains with her husband, a dog, and two cats - one of which owns everybody and everything in the house. They share their old home with a ghost who likes to flip switches and throw power tools until he gets what he wants (bright, shiny objects to play with).
Bonnie spends her time writing, hiking and having fun with her friends. She enjoys planting obscure specimens in the backyard garden to see what pops up, and she's fascinated by unseen forces and creepy-crawly things.
Dawn of the Hunter is her second full-length fiction work.
Find out more at http://midnighthuntertrilogy.webs.com/

Summary: (Goodreads)
Donna is on the wrong end of a high-power assault rifle, with a 4000 year old demon’s trigger finger on the other. He’s promised to blow her brains out if she gets any closer. She takes a step…toward the monster. Until that day, Donna was enjoying her new life. Married to the man of her dreams, raising the child they had together, spending time with her best friend…what more could a girl want? How about a chance to save the world? The opportunity arrives when a strange, beautiful woman befriends Donna and then kidnaps her baby. To get her little girl back, Donna must do what’s humanly impossible...and maybe inhumanely impossible, too. With the help of a fallen Underworld goddess, a vengeful demon, and her own new-found strength, Donna must rescue her baby and the world.

I'd Recommend to...
anyone, really

My Thoughts:
Donna and Hunter are now married and their prophecy-holder daughter, Lucinda is 3 months old. While buying diapers for the kid, Donna runs into Jaquelina,  a minion for Michael St. James, the old mayor, and an ex of Hunter's. She sneaks into the house one night while the vampires are away and steals Lucinda. Alicia, goddess of Beauty in the Underworld, helps Donna go to Howie to get the girl back. Howie and Donna rescue Lucinda and Cassie, a records-keeper of the prophecy, from Stephen. But a war has started. With the help of her friends, Donna can help to stop it. But will it be truly over with?
Dawn of the Hunter picked up right around where Midnight Hunter left off. If you didn't read Midnight Hunter, you would not be lost by reading Dawn of the Hunter as you would be in some series. That is a majorly good thing. I really hate it when you go to read a book, not knowing its not the first in a series or even that its in a series at all, and you get mega confused because you don't know whats happening. In Dawn of the Hunter, that never happens. Bonnie Bernard did a fabulous job of making sure that the readers know what is going on at all times and I think that is a key point to any good piece of writing.
The plot was an easy one to read, and it didn't really have any boring parts that you would want to just leave the book alone. There wasn't really anything that you'd be like "Oh my goodness, I need to keep reading!" either, but it was a nice, easy read. I liked how it was a vampires vs. demons war, instead of the overly popular vampires vs. werewolves that most books, movies, and television shows nowadays seem to deal with. It was a nice way to change things up and I think it was definitely much needed.
I'd totally tell people to read this if they're into reading.
Posted by Tasha Nicole at 4/10/2012 04:35:00 AM