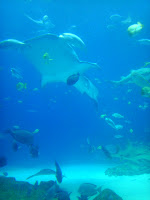 I went to the Georgia Aquarium in Atlanta, GA for the first time at the end of March 2012. The aquarium has been open since 2005. It is easy to get to if you know how to navigate those one-way streets and such in Atlanta. I went as a chaperone for my daughter’s field trip. On the way from the parking garage, there is a covered pathway and speakers align it. Deepo speaks to you as you walk toward the aquarium. Deepo is a fish that looks like Finding Nemo, except he’s all orange. On the sidewalk are dolphin fin imprints and signatures from celebrity dolphins such as The Olsen Fins and Dolly Partfin.

So you reach the front entrance and to me it’s not really impressive. They have some dolphin sculptures decorated in various themes. You line up to get your tickets or if you ordered online you can go directly to security to be scanned for prohibits items, have your bags searched, and your mug shot taken—I mean your souvenir picture can be taken for pickup inside—or you can just enter the “lobby” or main area. It’s huge too, like a mall. (Do people still go to malls?) You can see the entrances to all the exhibits and they’re clearly marked with large exciting-looking glowing signage. There is a second-level balcony where some of the exhibits’ exits are located as well as tables and seating. Around the main level are gift kiosks, a cafeteria, and easy to locate bathrooms and areas to sit and rest or eat. There is a large gift shop which is strategically located so you have to walk through it to exit the aquarium.


We visited the following exhibits: Cold Water Quest (penguins), Tropical Diver (tropical fish and coral reef), Ocean Voyager (whale sharks and manta rays), River Scout (alligators), Dolphin Tales (live musical dolphin show), Georgia Explorer (two-story jungle gym-like structure and giant whale-shaped slide). There is also a Frogs exhibit we didn’t see and a 4D Theater show with Deepo and friends. This aquarium has a lot of different animals including otters, Beluga whales, spider crabs, jellyfish, lionfish, starfish, and sting rays. There are several exhibits where you can touch the animals (with two fingers only). You can pay extra to have more in-depth encounters with animals like the dolphins.


The Georgia Aquarium is a very kid-friendly, family-friendly place. There are interactive shows with Deepo. The Dolphin Tales show was great. It looked big and more exciting on TV, but that’s what TV is: the lure. However, I was not disappointed and the kids were amazed.
The food court had everything you could want from a fully stocked, self-service salad bar to a burger and fries, and pastries that looked like they were from a four-star restaurant. To give you an idea on the prices, I paid $13 for a bottle of water, chicken tenders and fries.
My only compliant was that in the Georgia Explorer indoor jungle gym thingy, there was like two inches of dust and lint on the metal safety guard grill and railings on the second floor. But there were plenty of hand sanitizer stations throughout the building.


It was a great visit. The children even got to see divers inside the tanks cleaning them. They thought that was cool. I’ve been to the Tennessee Aquarium and I liked it a lot. The Georgia Aquarium may have bigger animals, but the Tennessee Aquarium has more diversity—more types of jellyfish and sea horse for example. I think, however, that they are evenly matched for wonder and entertainment. You can’t go wrong with either one. I just wanted to see a real whale shark at the Georgia Aquarium. That was my big thing. They were 33 feet long.


Value: Worth the money when you see how big it is and the maintenance involved in feeding and housing these animals safely in this gigantic facility.


Favorite Exhibit: Ocean Voyager with the moving conveyor walkway that takes you right underneath the football field-sized tank where the whale sharks swim.


Recommend: For all ages. Families. Wheel-chair and stroller accessible. I also recommend getting a City Pass so you can visit many 5 exhibits in Atlanta (Georgia Aquarium, World of Coca-Cola, Atlanta Zoo, etc) for one low price: $69 adult and $49 for child (3-12). The World of Coca Cola is right next to the Georgia Aquarium and you could go from one to the other without moving your car.