This guest post was brought to you by Doxology! 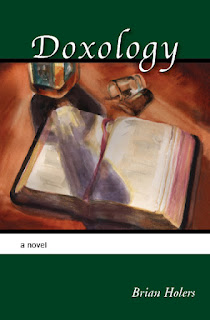 FREE One Day Only: An Engaging and Haunting Southern Tale

Fathers, sons and brothers reconnect over tragedy in this blue-collar Southern tale of love, loss and the healing power of community and family.

Doxology does for small town Louisiana men what Steel Magnolias did for small-town Louisiana women, exposing flaws while showcasing their inner strengths. It is a tale of grandfathers, fathers, sons and brothers, and recreates family dynamics and memories in a way that forms a doxology, a song of praise for the male family bond, the emotional ties men conceal from the world and each other.

After a lifetime of abuse and loss--from fights with other boys staged for his father's entertainment, to the death of his only son-- sixty one year old Vernon Davidson is angry. He's ready to get back at God, his paper mill coworkers, and everyone else in his north Louisiana town. Constantly drunk to numb his pain, the normally cautious Vernon spirals into recklessness; drinking on the job, facing down a younger man at work over a parking spot, scandalizing his former fellow Baptists with displays of his nakedness. Meanwhile Jody Davidson, Vernon's estranged nephew, struggles to survive a similarly tragic past by self-imposed exile, inserting himself into a new, seemingly different family a thousand miles away. The two men are reunited when Vernon agrees to retrieve Jody for his dying brother so they can say goodbye-and that's when they each embark on a journey that will ultimately change their lives.

Brian Holers’ Doxology examines an impossibly difficult question: how does a man go about forgiving a God he has grown to despise after the tragedies and endless disappointments he has faced?

Follow Vernon and Jody on their road from loss to healing in this deep and moving book that will challenge and surprise you, as it takes you deep into the backwaters of rural Louisiana.

The Reviews Are In

“The story of fathers and sons, brothers and cousins, had me laughing out loud one minute and bawling like a baby the next.” ~A. Chambers, Book Blogger

“The author shapes his characters with love and respect. In writing of the Southern world in which these men reside, he avoids the use of dialect. Instead, he skillfully builds the cadence of life particular to the rural South with words pictures of that slower lifestyle. His characters meander through the telling of slow, roundabout tales, always interrupted with side forays to detail the family connections of everyone in that story. Friends, as well as strangers, visit through the open window of dusty pickups, lean on a broom or shovel throughout a conversation because the work will still be there after all the local news is exchanged. The reader longs to be sipping the sweet iced tea in the afternoon heat, to smell the smoke from the local barbeque pit before diving into a plate of tender ribs, or to taste the yeasty beer or sharp slide of whiskey across the tongue after the sun goes down.” ~Suzanne G, Author

“Call me a feminist, but I have never read anything so `emotional' written by a man. No offense to all the other male writers, but somewhere down the line, I find that they are usually unable to tap into emotions as well as the female authors do. But Brian Holers has managed to break through that and has captured the true essence of emotional ties/bonds that make a family.” ~Book Blogger

No eReader or Kindle? No problem. Get free apps for your Web Browser, PC, Mac, iPhone, iPad, BlackBerry, or Android Phone.