And Then Everything Unraveled 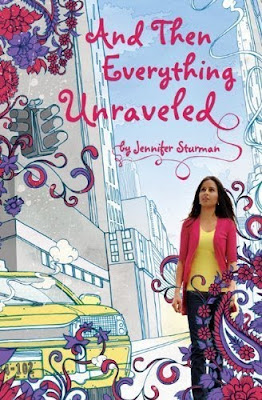 And Then Everything Unraveled
by Jennifer Sturman
Summary (from Goodreads)
Delia Truesdale has no idea her life's about to change forever. She's too busy enjoying the California summer. Her internet tycoon mother, T.K. Truesdale, is out of town, and that means Delia can spend all her time at the beach, surfing. That is, until everything unravels.
Her mother suddenly goes missing, and everyone thinks she's dead - excpet Delia, who knows T.K.'s way too organized to simply disappear. But Delia's still sent to New York to live with her two aunts - a downtown bohemian and an uptown ice queen.
And in case that's not bad enough, she also has to deal with a snooty new school and trying not to fall for the wrong guy. Oh, and finding her mother.
As she delves deeper into the tangle of conspiracies and lies surrounding T.K.'s disappearance, Delia begins to suspect that the wrong guy may be the right guy...and that some secrets - especially the dangerous ones - were never meant to be unraveled.
My Rating: 4/5
My Review
I wasn’t even interested in this book the first time I saw it at the shop. Until I was randomly rummaging through my friend’s book collection, read a few pages and got really into it in an instant. What I really love about it is that the author doesn’t drag the story around like a sack of potatoes. Like the beginning where the heroine’s mother goes missing, she didn’t take up a lot of space rambling about how it was when her mother was around or anything like that. The book also offers some really interesting characters that we don’t usually see, which pretty much makes up for some of its cliché parts (popular school boy has an instant connection with new girl on the first day).
The only thing off about this book is that things didn’t exactly – as the title says – unravel. It ended with a finale that was obviously another beginning. I guess that’s an excuse to publish a sequel for it, but I really don’t mind. It kept me on my feet the whole time, made me go “aww” at romantic parts and made me realize the brittleness of Mother Nature (coz half of the book is about that too).

Recommendations
I would recommend this to anyone who likes their romance novels served with a slice of mystery.. :D
Posted by Le Mashed Potatoes at 1/12/2012 06:42:00 AM