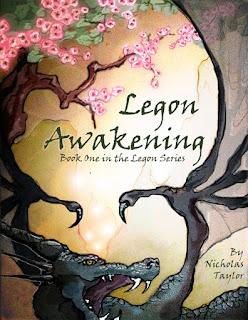 I received this as a free kindle download. This is the story of Legon and his sister Sasha who are forced from their small mountain village into a world of magic and dragons.

I would not recommend this to readers with weak stomachs because of the detailed violence. People are not just killed, their demise is medically detailed with amounts of blood and which tendons are involved. It sounded slightly clinical in the details. Like someone who had medical training wrote those parts.

That said, the world is well thought out and the author knows it well. Although I didn’t need to know every little detail as sometimes described relating to the mechanics of some of the magic.

The characters’ language was a bit too modern. There was too much modern slang in it and made the story sometimes sound foolish. The language was easy to follow but like one reviewer said, why were they “fist bumping” with elves and calling themselves “hot” when they had on nice clothes in a fantasy. It just seemed out of place especially after what some of these characters went through.

For these reasons it was hard to immerse myself in the story of this world. Was this a distant future or a completely new and fantasy world?

I gave it three stars because of the world built and story potential. The characters were funny sometimes but really not individuals. We knew what everyone was thinking and they pretty much sounded all the same. And when there could have been potential for a character to really stand out, it didn’t happen.

This is a series and I’m not sure of the outcome. I’m not sure the author knows either. Our hero Legon has no idea what he’s destined to do and neither does the reader. Sometimes you have an inkling of where the story will lead, but in this first book of the series I was not made to care enough about Legon to find out his purpose.

Great imagination. Just like Keither there just needs to be a little more writing practice and training to reach the full potential.