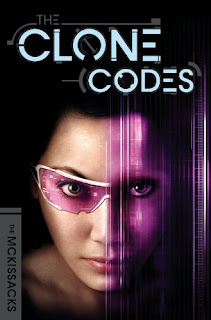 The Clone Codes
by The McKissacks
Summary (from Goodreads)
The Cyborg Wars are over and Earth has peacefully prospered for more than one hundred years. Yet sometimes history must repeat itself until humanity learns from its mistakes. In the year 2170, despite technological and political advances, cyborgs and clones are treated no better than slaves, and an underground abolitionist movement is fighting for freedom. Thirteen-year-old Leanna's entire life is thrown into chaos when The World Federation of Nations discovers her mom is part of the radical Liberty Bell Movement.
After her mother's arrest for treason, Leanna must escape as she is chased by a ruthless bounty hunter. Soon Leanna finds herself living among the Firsts, and nothing will ever be the same again. But what does The World Federation want with the daughter of a traitor? So much is uncertain. Danger hides everywhere. Fear takes over. With help from unlikely sources, Leanna learns the origin of The Liberty Bell Movement and how its members may have answers about her past-and her new reality.
As family secrets are revealed, Leanna must face startling truths about self-identity and freedom. Through time travel, advanced technologies, and artificial intelligence, this exhilarating adventure asks what it means to be human and explores the sacrifices an entire society will make to find out.
My Rating: 3.5/5
My Review
So Sci-fi isn’t the type of genre I would usually go for, but the summary for The Clone Codes on the Scholastic catalogue was so appealing that I just had to get it. Well, if I was a diehard sci-fi fan, I don’t think I would be much excited about this book. It has a good setting and a great storyline that might just explode into something wicked awesome… but didn’t.
The book started amazing – the McKissacks really had a way of creating a scene and making it so real that is can be passed as reality. The most exciting part was the middle. Like any other book, The Clone Codes had its twists and turns, but they were the ones that can give you a heart attack… a good one. But when it came to the end, I was slightly disappointed. It was like the authors didn’t know what to write next and just started taking turns writing random paragraphs at that point. The entire story just stopped midway. There wasn’t any explanation.
Don’t get me wrong, I really loved this book. Though I had to give it four stars because I wasn’t satisfied with the ending. After that I took another half a star because they never really gave their hopeless romantic readers an explanation on the lovebirds of the story. This book had so much potential in being better. I think one of the main reasons it didn't do better was the fact that it was too short for the story the authors was trying to create. I heard there is going to be a sequel -  and believe it or not – I’m getting it. And only after I get my fair share of Whos and Whys, I will die in peace.
Recommendations
I wouldn't recommend The Clone Codes for avid Sci-fi readers, but if you're one of those people who would read anything you get your hands on, this book would do just fine. It's short, sweet and doesn't take up a lot of your time.
Posted by Le Mashed Potatoes at 1/08/2012 01:23:00 AM