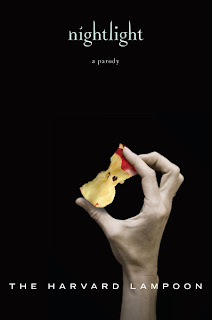 Nightlight: A Parody
by The Harvard Lampoon
Summary (from Goodreads)
About three things I am absolutely certain.
First, Edwart was most likely my soul mate, maybe.
Second, there was a vampire part of him--which I assumed was wildly out of his control--that wanted me dead.
And third, I unconditionally, irrevocably, impenetrably, heterogeneously, gynecologically, and disreputably wished he had kissed me.
Pale and klutzy, Belle Goose arrives in Switchblade, Oregon, looking for adventuree, or at least an undead classmate. She soon discovers Edwart, a super-hot computer nerd with zero interest in girls. After witnessing a number of strang events--Edwart leaves his Tater Tots untouched at lunch! Edwart saves her from a flying snowball!--Belle has a dramatic revelation: Edwart is a vampire. But how can she convine Edwart to bite her and transform her into his eternal bride, escecially when he seems to find girls so repulsive?
My Rating: 4.8/5
Nightlight was seriously funny, there’s no doubt about it. Just so you didn’t get the message from its cover, Nightlight is sort of a parody of the Twilight saga – in book form. What’s great about it is that it wasn’t a word for another funny word book. It’s funny in its own unique and original way, but you can still see a hint of Twilight in its core.
The only problem Nightlight has with their readers is the readers themselves. I’m not so sure which audience the book is trying to appeal to. I mean, Twilight fans definitely wouldn’t spend their money on something that’s insulting the book they love. Twilight haters couldn’t possibly bear with another book that is somehow related to Twilight. All that’s left is the older readers and believe me, most of them did not show the book mercy at all on Goodreads.
Personally, I think it was awesome… and random. It doesn’t depend on juvenile or overused jokes to keep the book alive and hilarious.
Posted by Le Mashed Potatoes at 1/24/2012 05:27:00 AM